Men in Black 3 — How Did That Happen? 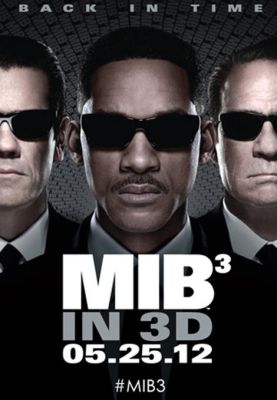 As a movie reviewer, you try to set aside any preconceived thoughts you might have when you sit down to watch a film — even when said film has had a tumultuous path to the multiplex and seems preordained to be terrible. But, hey, you’re only human. Still, you do your best.

No recent movie has had as tumultuous a path to the multiplex as Men in Black 3. And I admit, I went in thinking it was going to suck hard. (Hey, I’m only human.) But I’m happy, and somewhat amazed, to report I was wrong. Men in Black 3 might not be perfect, but it’s a whole lot better than it has any right to be. In fact, it’s pretty good…and, believe it or not, rather sweet.

A little more than a year ago, Hollywood was abuzz about the debacle that was the MIB3 production. The flick’s start date was pushed back, shooting began without a finished script, egos were out of control, production was stopped while two separate rewrites were completed by as many writers. Tinseltown cognoscenti predicted disaster and failure of epic proportions. It might even be worse than, gasp, Men in Black II.

But here we are with an MIB3 that actually succeeds in ways both expected and unexpected. There are the requisite cute and grotesque aliens; the state-of-the-art practical and digital effects; the huge action setpieces; the off-the-wall humor; and the fleeting sight gags (Howard Stern is an alien, y’all). But there’s also an unforeseen depth of emotion that took me by surprise.

We pick up in real time, 10 years after we last checked in with Agent K (Tommy Lee Jones) and Agent J (Will Smith). It seems a particularly nasty alien called Boris the Animal (Jemaine Clement) has come to Earth with the sole intention of killing K for taking his left arm and then imprisoning him on the moon. Boris will do this by going back in time to 1969 and killing K before he loses his arm. So he does.

When J gets to work the next day, he discovers that K died more than 40 years ago. Fortunately, new supervisor Agent O (Emma Thompson) pieces together what’s happened and, soon, J is on his way back to 1969 to kill Boris before he can kill K. 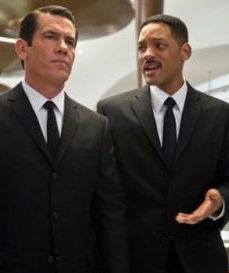 When J arrives in the past, he immediately encounters the kinder, gentler 29-year-old K (a wonderful Josh Brolin). After J convinces K that he really is K’s future partner, the two set about tracking down Boris and making things right. Along the way, they team up with Griffin (played with a prescient gentleness by Michael Stuhlbarg), an alien who is plagued with the gift of seeing an infinite number of timelines simultaneously.

Woven through all the wacky, high-concept antics is a plot thread that examines J and K’s relationship and reveals secrets that provide just enough heart to give MIB3 an emotional resonance that works startlingly well.

With its swooping camera, sly wit and limited color palette, MIB3 is definitely a Barry Sonnenfeld movie. Sure, it’s a little clunky at first, and the climactic third-act setpiece is kind of hokey. But, for the most part, Sonnenfeld hits all the right notes and does a good job of making the flick move. That’s not really a shock; Sonnenfeld is a pretty reliable craftsman. What astounds me is that he ended up with a script that works as well as it does. While David Koepp and Jeff Nathanson did substantial rewrites during production, original screenwriter Etan Cohen receives the only credit for the finished picture.

Going in, I was troubled by the film’s time-travel angle. This is something of a pet peeve of mine. Rare is the movie that can pull off this conceit. And MIB3 doesn’t succeed completely — there are a couple of inconsistencies that are explained away quickly — but it puts its head down and plows forward good-naturedly. To my surprise, it managed to drag me along with it.

With Men in Black 3, Sonnenfeld has delivered a crowd-pleasing blockbuster possessing a dose of sweetness not usually seen in big-budget summertime entertainment, which in itself is quite an achievement. That he managed to do it with this particular tumultuous project is a downright miracle.