Special Screening Alert: You Need to See ‘There’s Nothing Out There’ 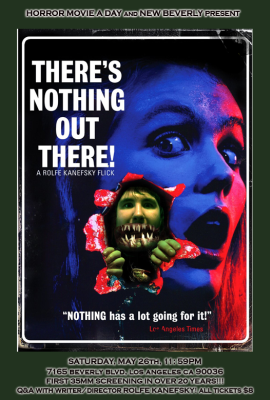 If you live in Los Angeles and haven’t made weekend plans yet, we just got word of a cool upcoming event you should absolutely check out.

On Saturday, May 26, director Rolfe Kanefsky‘s first flick, There’s Nothing Out There, is being screened at the New Beverly Cinema. I know what you’re thinking: “What’s so special about a screening in L.A.? ” But, trust me, this is a pretty big deal.

Kanefsky is a journeyman filmmaker perhaps best known for 2004′s The Hazing, a nifty Halloween haunted house flick starring Tiffany Shepis and Brad Dourif. While that is a great movie, Kanefsky’s debut is actually something of a groundbreaker.

Filmed in 1989 by a 20-year-old Kanefsky, There’s Nothing Out There served as his calling card to the film industry. As a long-time fan of scary movies, Kanefsky concocted a standard horror film — he put a bunch of teenagers alone in a secluded location with a cheesy rubber monster — but brightened it with one clever conceit: One of the teens, a horror movie fan, realizes they are in trouble and then accurately predicts the events that follow based on the fright flicks he loves so much. Sound familiar?

The New Beverly showing marks the 20th anniversary of There’s Nothing Out There as well as the first 35mm screening in over two decades. Also, Kanefsky himself will be present to do a Q&A session before the movie. There will be special guests, awesome prizes and lots of behind-the-scenes gossip about how movies get made in Hollywood’s entertainment industrial complex — otherwise known as the Land of (Broken) Dreams.

If you’re a fan of low-budget ’80s horror, you have to see There’s Nothing Out There — it’s wonderful little film in own right, one that’s been sadly overlooked through the years.

This article was posted in Updates & Teasers! and tagged Brad Dourif, Kevin Williamson, New Beverly Cinema, Rolfe Kanefsky, Scream, Screenings, Slammed & Damned, The Hazing, There's Nothing Out There, Theron Neel, Tiffany Shepis, Trailers, Updates & Teasers, Wes Craven. Bookmark the permalink. Follow comments with the RSS feed for this post.Trackbacks are closed, but you can Post a Comment.