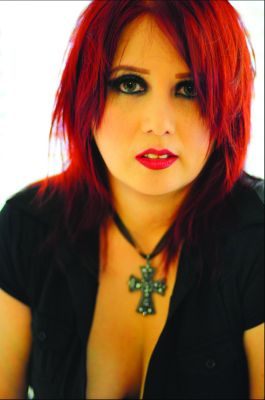 One of the hottest new trends in horror finds noted authors adapting their books to the medium of comics. Best-sellers like Stephen King, Clive Barker and Laurell K. Hamilton have all seen their work transformed into four-color fear. But the fun isn’t strictly limited to household names.

The latest writer to see her scary stories get the graphic novel treatment is indie horror scribe Lia Scott Price. Known by a devoted cult following for her vampire trilogy novel, The Guardian, Revenant, and Dominion, Price has recently jumped to the realm of comic books with a series called Vampire Guardian Angels™.

Like the best horror, Price’s work takes a fresh look at a familiar topic. But what sets her writing apart is its use of a universally beloved, sacred symbol as a jumping off point for terror.

“I turned our everyday guardian angels into vicious vampires,” Price told me recently. “In the series, guardian angels from Heaven have become vampires who kill people who pray to them for help. But of course, humans and ‘good’ angels work together to stop them — classic ‘good vs. evil.’”

Well, perhaps not “classic” good vs. evil. What provoked this violent new spin on one of contemporary society’s most cherished archetypes? “I was in a church one time listening to a sermon about how guardian angels were there to protect us,” she said, “and my first thought was,  ‘What if they harmed us instead?’ That’s what inspired me to write the novel. From then on, it was a ‘what if’ game: What if guardian angels were serial killers? What if they were sick of hearing our prayers? What if they killed us instead? By the second novel, it was ‘What if they were vampires?’ Then it all went downhill from there.”

Insubordinate angels are not unusual — from the Bible to The Prophecy, popular culture is full of holy messengers with bad attitudes. But, I pointed out, the concept of angels as serial killers is definitely fresh territory. Price smiled. “My idea was to portray what a guardian angel was really thinking. I mean, if it was your job to answer millions of prayers a day, or to watch over some humans who may do stupid, dumb things that they expect you to save them from, or to act as a sort of Heaven Hotline/guardian angel customer service where you constantly had to solve people’s problems, I bet you would eventually snap and go ape-crap ballistic. 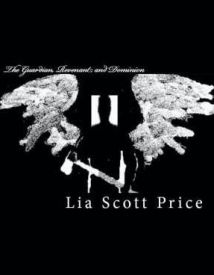 “So I wrote from the standpoint of ‘what were they really thinking/feeling/wanting?’ Did they feel any sense of resentment toward humans? Do they want to quit their jobs? How far would they go to shut us up? What would they do if they had freedom and absolute power? It’s ‘guardian angel turned psycho’ time,” she laughed. “And adding the vampire element makes them even more fucked up.”

Because religion is such a hot button issue these days, one would think this depraved depiction of God’s ministering spirits might cause, at the very least, a certain amount of outrage. No so, says Price. “People have been overwhelmingly supportive because I think they want to see a unique, fresh take on the vampire image and welcome something entirely new and original.

“Horror is about stretching the imagination,” she said. “I’m sure it’s rather disturbing to some people to see a guardian angel become a serial killer and a vampire, especially if I’m writing about something that kills you when you pray. But actually, the reaction has ranged from fascination to ‘that’s really interesting.’”

It helps that Price is not just out to shock and offend. While her tales are brutal, there is serious thought behind them. “Just because I’m messing with the pop-culture image of a guardian angel doesn’t mean I’m condemning it or being disrespectful. I’m questioning why we rely so much on a supernatural entity to save us. It’s an alternate view to something supernatural.

“We put so much blind faith in a higher power to help us,” Price continued, “and we don’t even know what it is we are summoning. That’s the whole point of my books and films. Angelic rebellion is nothing new, but I’ve just taken it to another, more psychotic level.”

The world Price has created seems particularly cinematic, so it comes as no surprise her characters and stories were first conceived as screenplays. While taking acting classes, Price began writing scenes to perform with classmates. As she watched her words being brought to life, she was inspired to develop the scenes into stories, which begat chapters, which begat the volume of novellas, The Guardian, Revenant, and Dominion.

After the book’s success, it seemed natural to double back to the project’s roots and make films based on the material. So, Price taught herself filmmaking and created a series of low-budget shorts based on characters and scenes from the trilogy.

“My filming style is influenced by The X-Files and The Twilight Zone,” Price said. “I prefer something more stylistic with not  too much splatter, more slow-paced and creepy. I wanted to concentrate more on the acting and psychological impact of my stories rather than just becoming another slasher film. I like to be different and experimental. I want to see if I can portray terror in a more subdued, yet emotional way. It’s the characters and the message of my films that  should have the spotlight.”

Ever curious, once she’d tackled film, Price decided to jump into the medium of comics. “I use the films, and of course the comic books, mainly as a promotional tool for my characters and books, to introduce people to my works. I think it’s a more interesting and exciting way of ‘advertising.’

“That said, I’ve always wanted to see my Vampire Guardian Angels as comic book characters. I’ve already turned the novel into films, and comic books were the next logical step. The purpose was to bring the novel and the characters to life through all forms of visual imagery. It’s amazing to see that in a comic book format. And it makes them look badass too.”

Price’s new creator-owned comic book series, called Vampire Guardian Angels, features artist Andrew Setter and colorist/letterer Chad Hammontree, and will be a fully illustrated version of the original novels, consisting of three comics from each book in the trilogy. 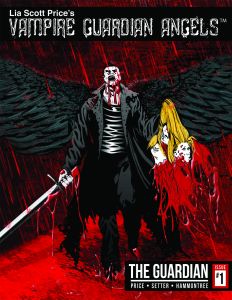 The colorful world of comic books has advantages that are exciting to the author. “I definitely love the creative freedom that comics have,” she said. “I love seeing my characters drawn just the way I envisioned them and the settings in the book come to life around them. To me, that has a much greater impact than just words on paper. I feel like one can relate to the characters and story more if they can see more of a visual image. You can portray a lot more visually — action, horror, emotion — and show way much more than what a novel can. You’re not limited to just words anymore.

Though it sounds like Price could use a vacation, she hasn’t slowed down. Actually, she has just wrapped filming her next short film, titled PRA/EY. “The director/cinematographer is Ray Rodriguez, and it stars me, Jennifer Cannon and Brandon Murphy Barnes.

“[PRA/EY is] based on some combined chapters from my trilogy, but uses the same main character. In the film, I play a mental patient who’s confined to a hospital and who tries to convince a psychiatrist not to pray to a guardian angel, and warns her of what would happen if she does. We’re now in editing, and the film should be released on DVD  this year.”

So there you have it. Books, films, comics — I’m not sure what’s left for Price to conquer, but I’m sure whatever it is, it’s already in her sights. For more information on all things Lia Scott Price, check out her official website (www.liascottprice.com/).

And beware to whom you pray. You never know who’s listening.