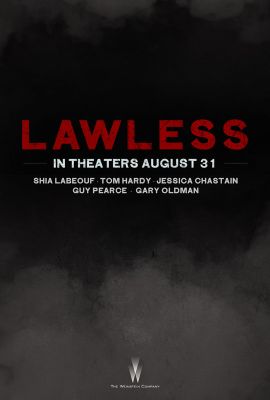 Lawless is a gangster flick set in Prohibition-era Virginia. Based on a novel based on a true story, the movie was directed by John Hillcoat and written by Nick Cave, the team that previously gave us the stark, violent 2005 Australian western, The Proposition.

LaBeouf stars as the youngest of three small-town bootlegging brothers who find themselves in over their heads when they get mixed up with a big-time bad guy (Oldman), a corrupt lawman (Pearce) and Jessica Chastain. Jason Clarke, Tom Hardy and Mia Wasikowska co-star in a film that promises the opportunity for plenty of period costumes, questionable regional accents and a master class from Oldman and Pearce for all the younger players.

LaBeouf is moving in some pretty fast company these days. I suppose his work in the multibillion dollar-grossing Transformers franchise has bought him some goodwill. And while I don’t get it, lots of important filmmakers do, including Oliver Stone, Steven Spielberg and Robert Redford, all of whom have recently tagged the ambitious young turk to star in their flicks.

If nothing else, Lawless will likely deliver some stark, violent setpieces; some great scenes with Pearce and Oldman; and some scrunchy faced emoting from LaBeouf. And, hey, two out of three ain’t bad.