Back in July 2010, Jen and Sylvia Soska first mentioned a top secret project called American Mary while doing press for their debut feature, Dead Hooker in a Trunk.

A few months later came the American Mary teaser trailer. Then, a couple of months after that came the announcement that the wonderful Katharine Isabelle would star as their Mary.

And this is how it’s been for almost two years: the Twisted Twins dangling American Mary in front of us, torturing us with little bits of info — not a lot, just enough to keep us interested. And, damn it, it’s worked. Of course, they know it’s worked; therefore, they are keeping it up. In other words, to quote Frank Zappa, the torture never stops. Which brings us to today.

That’s right, the latest American Mary teaser just arrived. The Soska sisters are finally giving us our first peek at the lovely Ms. Isabelle in character as Mary Mason, the disenchanted med student who dives into the deep end of the dirty pool known as underground surgery. 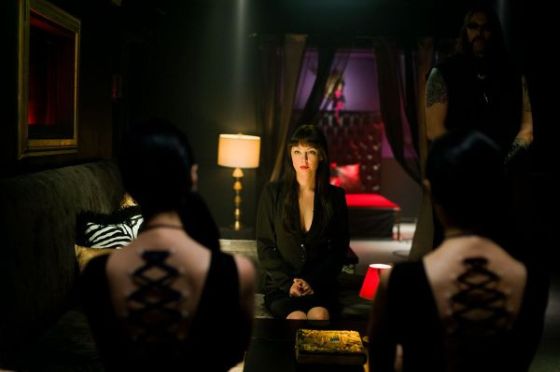 It’s an evocative shot to be sure — dark, moody, disturbing. This is par for the Soska course though. Word on the street once known as the Information Superhighway is that the filmmakers called upon members of the body modification subculture to appear in their flick. And, based on the women whose backs are to the camera in this photo, I’d guess the body mod involved is a little more extreme than corsets and nose rings.

Oh, did I mention that Jen and Sylvie are preparing to jet to France to premiere American Mary at Cannes next week? Well, they are. And judging from the photo below, they seem pretty excited about it. 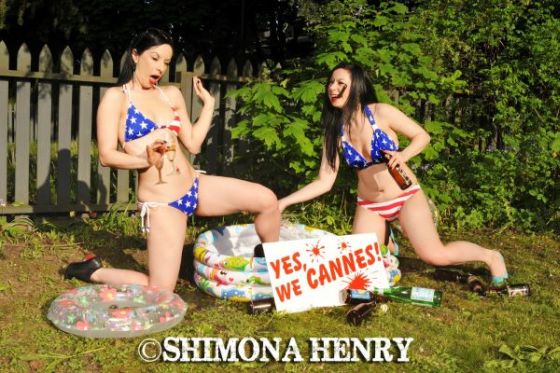 Bikinis, beach toys and body mods —  the American Mary saga continues. Stay tuned for the next episode, in which Jen exclaims, “So that’s what it takes to get kicked out of France!”

This article was posted in Updates & Teasers! and tagged American Mary, Cannes Film Festival, Dead Hooker in a Trunk, Frank Zappa, horror, Jen and Sylvia Soska, Katharine Isabelle, Slammed & Damned, Theron Neel, Twisted Twins, Updates & Teasers. Bookmark the permalink. Follow comments with the RSS feed for this post.Trackbacks are closed, but you can Post a Comment.