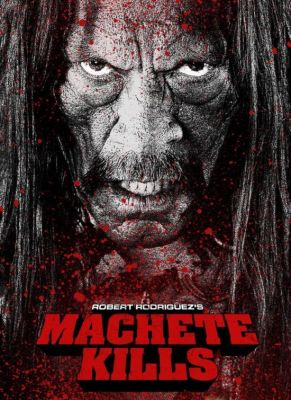 Robert Rodriguez is putting together quite a cast for Machete Kills, the second installment of the proposed trilogy starring Danny Trejo as the Mexican Federales/folk hero/lover of many women named Machete. And while Rodriguez might not be getting precisely everyone he wants, those he is getting are pretty good.

Trejo is returning, of course, as are Jessica Alba as Sartana, Machete’s main mama, and Michelle Rodriguez as Luz, the eye patch-sporting revolutionary/taco vendor known in underground circles as Shé. That’s a good start, but Rodriguez is also adding some pretty cool and/or interesting newcomers to the Machete-verse.

It was reported early on that the director had his heart set on getting Michelle Williams for the flick, but it appears she’s not going to be involved. But Rodriguez has scored big by casting Amber Heard as a scheming assassin code-named Miss San Antonio, which sounds like a role the actress was born to play. Heard can kick major ass, as she proved in last year’s underappreciated grindhouse throwback, Drive Angry. Since then, Heard has played retro eye candy in The Rum Diary and The Playboy Club, neither project allowing her to play to her strengths and neither project successful. Coincidence?

Also on board is the ubiquitous Sofia Vergara, taking a break from TV, where she stars on the hit series Modern Family and appears in approximately every other commercial aired. Rodriguez is apparently taking advantage of her, ahem, strengths as well, casting her as Madame Desdemona, who Variety informs me is the “leather-clad” employer of “Mexican harlots” in possession of “information that Machete needs” and whom Machete will almost certainly be compelled to pleasure in order to obtain said information. Vergara is a charming screen presence, but her casting begs the question, Was Salma Hayek busy?

If it sounds like Rodriguez is favoring the fanboys in the audience by stacking his cast full of hot women, don’t worry — he’s got something for the fangirls too.

Set to co-star as Luther Voz, “a cunning arms dealer and death merchant who aims to spread war across the planet by launching a missile,” is the lovely and bipolar Mel Gibson. I suppose Gibson figures his reputation can’t get any worse, so why not play a crazy warmonger. Whatever you think about Gibson, he’s a solid actor and, hey, anyone that hates Joe Eszterhas (aptly described by Slate editor David Plotz as “the Shakespeare of the Jerry Springer crowd, the eminence greasy of Hollywood”) can’t be totally unredeemable.

If Gibson doesn’t do it for you, perhaps the inclusion of Demián Bichir will be more to your liking. Often referred to as “the Mexican George Clooney,” Bichir has long been a star south of the border, though he’s recently become known stateside for his role as Fidel Castro in Steven Soderbergh’s Che Guevara biopic, not to mention his work on the Showtime series Weeds, where he portrayed a drug lord with a penchant for spanking.

Also, Tom Savini is set to reprise his role as hit man Osiris Amanpour, and martial arts master Tony Jaa is rumored to be involved in some capacity. Heck, I wouldn’t be surprised if Rodriguez manages to write in a role for Cheech Marin even though his character died in the series’ first entry.