For those of you tuning in late, let it be known that Hollywood is in the grips of an Alfred Hitchcock epidemic, which finds films about the master of suspense, as well as remakes of his work, gathering and attacking studios like the violent, crazed birds from Hitch’s 1963 classic, The Birds…which, fittingly, is one of the flicks being remade.

I think the casting is pretty good, but the heart of the film will be Hopkins’ work as Hitchcock. And while it will be a while until we find out whether he can pull it off and pronounce the words “good evening” in Hitch’s inimitable manner, we now have our first look at Hopkins in his Hitchcock makeup, and it’s not bad. Not bad at all. 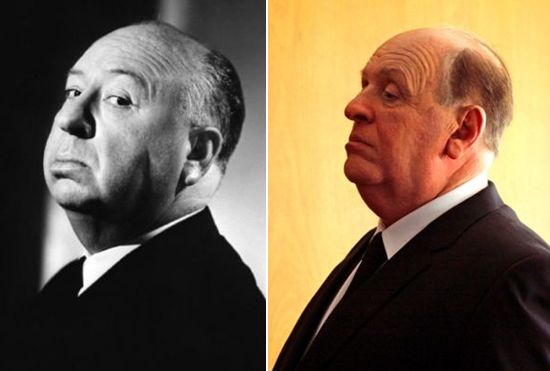 This article was posted in Other Awesome Stuff and tagged Anthony Hopkins, Biopic, Helen Mirren, Hitchcock, James D'Arcy, Jessica Biel, Other Awesome Stuff, Sacha Gervasi, Scarlett Johansson, Slammed & Damned, Theron Neel. Bookmark the permalink. Follow comments with the RSS feed for this post.Trackbacks are closed, but you can Post a Comment.