Have a Drink with ‘Martini Mom & Devil Spawn’ 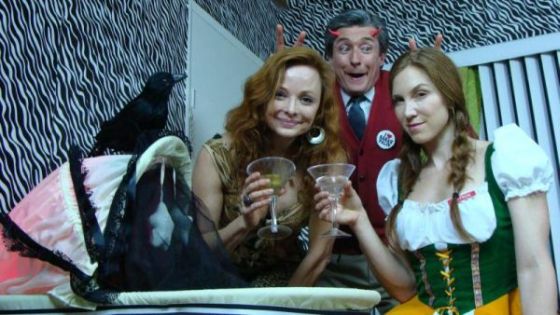 It’s official, my friends: The bar is now open. The first episode of writer/director Devi Snively’s sparkling new web series, Martini Mom & Devil Spawn, has been posted and it is indeed a strange brew.

Poor Rosemary. All she wants is a drink and a smile, but an ill-advised one-night stand provides oh so much more. Martini Mom & Devil Spawn is the tale of a, shall we say, directionless young woman whose aperitif existence becomes increasingly complicated when she bears the spawn of Satan.

Martini Mom is best described as a screwball comedy with a cutting edge. When I spoke with Snively recently about the DVD release of Trippin’, her first feature, she called the series ”Rosemary’s Baby meets Absolutely Fabulous with South Park/Family Guy-esque satirical humor, and the occasional gore and/or musical number.” Sprinkle a little I Love Lucy into the cocktail shaker and the concoction you get is Martini Mom & Devil Spawn — highball humor mixed with lowbrow laughs, served up in a chipped crystal shot glass.

Much like the perfect cocktail, this madness wouldn’t work without the right ingredients, and Snively has found a great cast. As Rosemary, Cynthia Dane is a very game performer. Whether it’s jokes about crack whore welfare moms or gags involving copious amounts of gore gushing from her vagina, Dane has the comedic range and lack of vanity necessary to get laughs from Snively’s offbeat scenarios. And Gillian Shure, the postmodern Ethel to Dane’s inebriated Lucy, matches her co-star beat for beat. Circus-Szalewski’s appearance as a right-wing Satan makes for a good punch line to be explored further in coming episodes.

Snively’s latest project beggars easy categorization, but that’s not unusual for the filmmaker. Martini Mom & Devil Spawn is either a scathing serving of social criticism or a stylized slice of gory whimsy — whatever it is, it’s hilarious, sharp and sardonic. In other words, everything you’d expect from Devi Snively and her team of Deviants.

If you’re at all curious about what Snively has mixed up, stop by for a quick one and a few laughs. You can quench your thirst at the show’s official website or at the YouTube. Bottoms up!

UPDATE: By popular request, I’ve embedded Episode One, “The Motherlode,” below. You’re welcome.