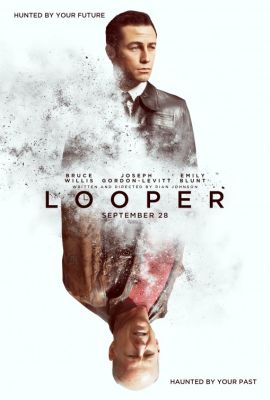 I usually have a lot of trouble with time travel movies. For every smart one, there are five illogical ones that either ignore or get lost in their own mythology and, consequently, are almost impossible to enjoy. It looks as if Looper is one of the smart ones.

Starring Joseph Gordon-Levitt and Bruce Willis, Looper is the third flick from Rian Johnson, a filmmaker who delights in exploring and subverting genre. His first feature, Brick, was a smart, successful film noir set in a high school. Johnson followed that with The Brothers Bloom, a whimsical take on the con-man movie.

Now comes Looper, Johnson’s take on the time-travel flick. But Johnson isn’t satisfied with hitting just one genre here. Looper is also rather dark crime thriller. Actually, for a film with so many elements, Looper seems quite elegant in its simplicity.

Set in a near future where time travel will come to exist in 30 years, Looper is the story of a group of hit men, called Loopers, who work for a crime syndicate. Their bosses send their targets back in time to the Loopers, who simply shoot the victims in the head and dispose of the bodies. So the target vanishes from the future and the Loopers dispose of a corpse that doesn’t technically exist in the present. See? Elegant.

Of course, things get complicated fast when a Looper named Joe (Gordon-Levitt) recognizes his latest victim (Willis) as a future version of himself.

Like all of Johnson’s movies, this project has a first-rate cast. Besides Willis and frequent collaborator Gordon-Levitt, Looper features Emily Blunt, Paul Dano, Garret Dillahunt, Jeff Daniels and Piper Perabo.

I’m pretty jazzed about Looper. It’s got one of those perfect plots. You know, the kind that makes you mad you didn’t think of it yourself. Oh well, as long as someone thought of it, right? For more information, go check out the film’s official blog.