Enjoy Some Exploitation Nunsense Courtesy of All Things Horror 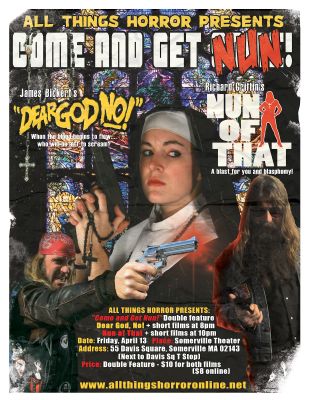 As hard as it might be to believe, Chris Hallock and Mike Snoonian, my good friends over at All Things Horror, might have finally painted themselves into a nasty little cinematic corner.

As proprietors of one of the best horror sites to grace the Inwebternet, Mike and Chris consistently post some of the finest reviews and features available. But they don’t limit themselves to the usual standard-issue fright flicks. They champion lesser-known horror films and filmmakers as well. But they also have a taste for, shall we say, more outré fare.

Yes, Chris and Mike go in for the sordid, the sleazy, the slimy and the seedy. And to prove their allegiance to man’s baser instincts, they are presenting a very special entry in their ongoing screening series “All Things Horror Presents.”

Tomorrow night (April 13; yes, Friday the 13th) at the Somerville Theater (55 Davis Square, Somerville, MA 02144-2908), the guys have a particularly profane double feature lined up for your sick pleasure.

At 8 p.m., the guys kick things off with “James Bickert’s ode to seventies sleaze fests, the blood, breasts and guts biker rampage Dear God No!” Starring Jett Bryant, Madeline Brumby and Paul McComiskey, this flick has been described as “Easy Rider meets bigfoot,” with a side of Charlie Manson. I mean, really, what else do you need?

Now, most people would think Dear God No! impossible to follow, but not Mike and Chris. No, these two hellions have dug deep and found the perfect complement to Bickert’s depraved flick: Richard Marr Griffin’s nunspolitation gem, Nun of That, which stars Sarah Nicklin as a nun who’s “callously gunned down in an alley [and] resurrected and trained in the art of ass kicking by notorious leg breakers Jesus H. Christ and Gandhi in order to come back [and] make sure criminal blood overflows the communion chalice.”

And, as if that weren’t enough, to cleanse your degenerate palate between screenings, there will be a couple of short films as well.

All of this wicked cool entertainment will cost you pagans only $10. That’s right, TEN DOLLARS. That’s a whole lot of sacrilege for just a little cash, and it’s definitely less than you’ll feel compelled to put in the collection plate when you head to church on Sunday to repent, you sinners.

So, if you like your exploitation fun on the blasphemous side, you should definitely hop on your hog, head to Massachusetts and check it out. I won’t tell if you won’t.

This article was posted in Other Awesome Stuff and tagged All Things Horror, All Things Horror Presents, Chris Hallock, Dear God No!, exploitation, grindhouse, James Bickert, Mike Snoonian, Nun of That, nunsploitation, Other Awesome Stuff, Richard Marr Griffin, Slammed & Damned, Theron Neel. Bookmark the permalink. Follow comments with the RSS feed for this post.Trackbacks are closed, but you can Post a Comment.