Talkin’ and Trippin’ with Devi Snively 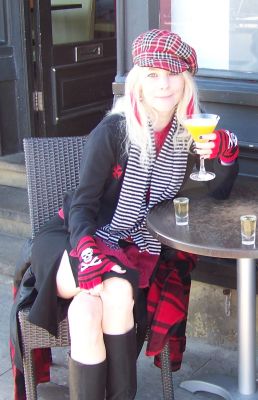 Thanks to a string of award-winning short films, Devi Snively has become something of a darling on the film-fest circuit, garnering a reputation as a filmmaker’s filmmaker. While this underground renown hasn’t translated to aboveground fame for the auteur, this might soon change thanks to the April 10 release of Snively’s first feature, Trippin’, in a deluxe two-disc set that also collects all her shorts. And if that doesn’t do it, her innovative upcoming web series Martini Mom & Devil Spawn likely will.

I recently caught up with the garrulous Ms. Snively for a wide-ranging discussion that covered everything from storytelling and Spider-Man to Oklahoma and the exact location of madness.

Congratulations on the Trippin’ DVD! You and Team Deviant have been making movies for more than a decade, but this is your first major release. Is it a validating experience?

Actually, several of our shorts have been released over the years [from Troma through Tribeca], though this is a much bigger deal for sure. However, for me, the validation has always come from working with my team to bring the films to life.  Everything after that is cake — mmmm, cake! Regardless, I’m thrilled that our early works have found a good home. And I’m positively ecstatic that the “kids are off at college” and I can party like it’s 1999 again. It’s a liberating experience in any case.

Does it feel like you’ve left the farm team and come up to the majors?

As Rodgers and Hammerstein would likely say, “The Farm Team and the Majors should be friends.”  I have long ago stopped worrying about such classifications. Madness lies that way.

I consider this wise counsel from one who knows well both madness and Oklahoma.

Some of the best advice I was ever given was at a winery in Sonoma. A wine pourer scoffed at the pretentious terms people use to describe wine and declared, “If you like it, drink it; if you don’t like it, don’t drink it.” I think the same can be said of most things in life. I don’t know how you’d describe where I’m at, but I like it and I’ll definitely drink to that!

I want to broach what might be a delicate topic. Trippin’ treads often-trod ground: three couples, a cabin, the woods — I’m sure you’ve heard “it’s been done.” Tell me, Devi, how do you feel Trippin’ fits into the whole “cabin in the woods” genus?

I’m so glad you asked, Theron. I knew going in we were taking a risk. Who wants to be held up against the likes of a classic like The Evil Dead or pigeonholed as another lame entry into an over-saturated, often predictable subgenre. But as a storyteller, I think the desire to experiment with tried-and-true, beloved tropes is inevitable.

Admittedly, I had the feeling of “oh no!” when we were in pre-production about the time I learned about David Arquette’s The Tripper. I was simultaneously horrified and elated to finish our rough cut only to learn of Joss Whedon’s Cabin in the Woods. And when I saw the trailer for Tucker & Dale vs. Evil, I was concerned somebody had made our same movie only way better and with a budget.  But having seen and/or read about the other films, I remembered something my writing mentor Sam always told us: “There are no new stories, just new ways to tell them.  What makes your story unique is you.” And our story is unique. That’s the one thing our reviews to date definitely seem to agree on. 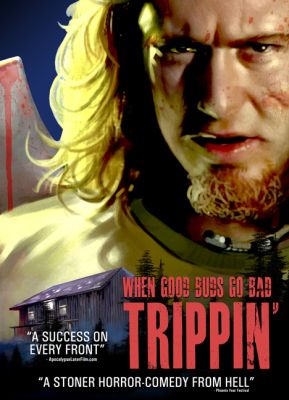 It’s definitely an approach we haven’t seen before — a new spin on an old favorite.

You’re a showbiz veteran at this point, but this must whole process must have been a learning experience. Was it exciting or just a new set of hassles to deal with?

I don’t know if I’m losing my edge, but the older I get, the fewer things I identify as “hassles.”  Babies have to deal with hassles every second — they wet their diapers, don’t speak the language, can’t even eat or get around on their own. That would suck. No wonder they’re always crying.  But nowadays most everything seems exciting to me.  I see inspiration everywhere I look.  Life’s far too short to consider anything a hassle.  If a girl can’t recognize all the excitement, she’s failing. So, yeah, exciting! All of it, always!

Consider it noted: “Devi is definitely a glass-half-full.” I mean, a “glass-half-full person.” Now, if we may, let us talk about your balls, dear lady. The last time we talked, Devi, you had a hundred different balls in the air. What’s up with them? Have any of your balls dropped?

The nice thing about my balls is, even though they do occasionally drop, they seem to bounce back — probably why I still have this girlie voice, alas. I’m sad to give up teaching for a spell, but I still give guest lectures and am co-authoring a chapter to an academic book, so academia is not entirely lost.  I’ve got several features riding the ever-exhausting development rollercoaster, but one’s now in the early stages of pre-production [and] set to start shooting in 2013, which is just around the corner.

We’re still in the financing stages of our most ambitious short to date, but meanwhile I’m shooting an international web series and two documentaries to keep my filmmaking muscles flexed.  And I’m currently on two feature-writing assignments on top of writing my first two novels to boot — prose is my new Zen. Love it!  All of this, plus continued festival travels and the occasional meals and naps seem to round things out nicely. AC/DC might have the biggest balls of all, but I daresay mine are enjoying lots of action.

Consider it noted: “Devi has busy balls.” Okay, befitting your status as a “real” filmmaker with a DVD and everything, you attended Sundance a while back. How was that? Did you hobnob with the cinema elite?

That said, Sundance was a blast.  I suppose I hobnobbed — that would certainly explain all the mysterious business cards and strange voicemail messages I received.  However, my favorite part of Sundance is actually seeing the movies, which is why I usually go, crazy though that must sound.  This is the first time I had other reasons for attending and while it was still a wonderful time and I met some amazing kindred spirits, I really missed seeing the movies and standing in lines where I always meet wonderful folks.  I guess the thing is, I already live in L.A. most of the time, so when I leave it, I like to leave it for real.  I guess I’m in the wrong business, eh?

Actually, to me it sounds like you might be what’s right about the wrong business. Now, this DVD set contains your first feature as well as all your previous short films. So, that’s it — all your work is out there, finally. You’ve cleared the decks. Is it freeing in a way?

Absolutely! I’ve had great fun going through my artistic adolescence in the public eye.  I’ve always been the first to laugh at my own mistakes and I don my battle scars with pride. Now both are immortalized together on a 2-DVD compilation. How cool is that?

It’s pretty cool to see the evolution from our earliest entries to the later ones.  It’s also a treat to see the whole family together.  I’m glad our Deviant team will have this nice souvenir from our earliest adventures together.  But, yes, I do also feel liberated to explore all new territory — “Deviant Pictures: The College Years.”

Well, hopefully your sophomore feature  can avoid the dreaded “Freshman 15.” Trippin’ was made before, and for less money than, a couple of your shorts. But since it’s your debut feature, it’s getting all the attention. How do you feel about being judged on an earlier work that maybe isn’t an accurate display of your abilities as a filmmaker?

I can’t imagine anybody likes being judged in general. And, in all truth, it is hard for me to watch anything we’ve made when I’m by myself, because I only see the things I would do differently knowing what I know now.  However, when I watch any of them with an audience, that all melts away. The laughs, the gasps, the subsequent discourse are priceless.  We must have done something right.  Our early films are not super-polished and sophisticated by any stretch, but they all have heart and are reasonably entertaining.

Well, I think they are pretty sophisticated.

The later ones add thought-provoking subtext to the mix.  I’ve seen a lot of more-polished films that can’t boast as much.   So, let the nay-sayers judge away. I’m proud of our oeuvre, grateful for the lessons it’s taught us and stoked for the exciting places we’re headed next.  Besides, as a chemically induced blonde, I am no stranger to revealing my roots.

I know you think more about the future than the past. Like a little blonde shark, you move forward ceaselessly. You’ve told me about some very exciting upcoming possibilities. Are there any you can share with your adoring public right now?

Wow!  You know my adoring public? 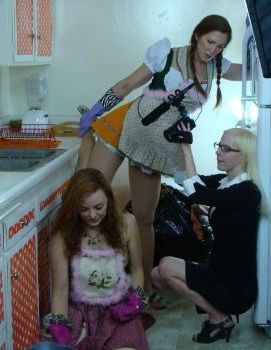 I love those guys!  Tell ‘em “hi” for me — Hey, Trevor, Hey, Max!   And, thanks for asking, there is something fun on the horizon that I want to share — literally share.

Attention all Kindred Spirits — yes, that means you, Trevor and Max, and even our non-adoring public.  If you are funny and not a dick, you are invited to write, shoot, direct, act in or otherwise contribute to our latest international filmmaker potluck: a new comedic web series called Martini Mom & Devil Spawn.  It’s basically Rosemary’s Baby meets Absolutely Fabulous with South Park/Family Guy-esque satirical humor, and the occasional gore and/or musical number.

We’re scrambling to make our April 10th launch date, to coincide with our DVD release, and if all goes as planned, we’ll post a new episode every few weeks during the course of the first season.

Though I’m writing and directing the bulk of the episodes in season 1, it’s my dream to have guest writers and directors from around the world contribute storylines, segments, even whole episodes and spin-off series so we can cultivate an online filmmakers commune if you will. More details will be at the Martini Mom website by week’s end…if we’re on schedule.

Hear that, world? This is your chance! Speaking of the world, you just returned from a trip down under related to Martini Mom, right?

We just finished shooting an episode in New Zealand with a second unit cast and crew, and a co-writer from Wellington, which will serve as the pilot episode for their spin-off series. I’m in talks with filmmakers in Portugal, London and Paris about doing the same thing in those countries, and we’re toying with a Gibraltar episode as well.

So, let me get this straight — an international shared web series collective? This is pretty exciting and, dare I say, groundbreaking.

It’s probably the most fun I’ve ever had on a set, which says a lot — Deviant sets are generally pretty festive. No rules, no expectations, no budget, no worries.  We even drink martinis at the “martini shot.” Art for the sake of fun is always my favorite kind.

I love it! Autotelic art for and from the Deviant masses. ¡Viva la Revolución!