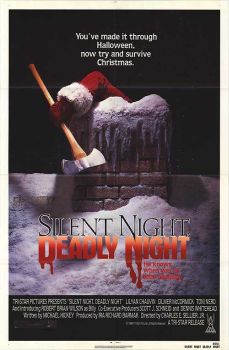 This just in from the Not Another Pointless Remake desk: Malcolm McDowell, who apparently has tax problems or wants to add a hot tub to his pool or something, has signed to star in Silent Night, the forthcoming remake of 1984′s notorious Santa slasher flick, Silent Night, Deadly Night.

Variety is reporting that Silent Night, which will be directed by Steven C. Miller (Scream of the Banshee) and written by Jayson Rothwell (Malice in Wonderland), will be a “loose” remake. So if you’re a devoted fan of the original movie, you can be either extremely outraged or barely outraged. Or, like the rest of humanity, you can just stare blankly, shake your head slowly and utter a snide aside along the lines of “of course” or “because why not.”

Apparently, the focus of the new version of this horrific holiday classic will shift the focus from the psychotic Santa to McDowell’s Sheriff Cooper, the small-town lawman in charge of the investigation. As much as I love Malcolm McDowell (and I love him a lot), I can’t help but think that, based on this description, he’s been miscast here.

McDowell can and has played a wide range of roles — he’s been wonderful as everything from sadistic ruffian Alex, Caligula and H. G. Wells to Jack Cassidy, Dr. Loomis and Metallo — I  just have trouble seeing him as a small-town lawman.

As much as this obvious cash grab irks me, I’m happy for McDowell. He’s a great actor, so who knows. This could be good. I can’t blame him for taking part. The dude is almost 70. Who can blame him for snagging as many leading roles as he can.