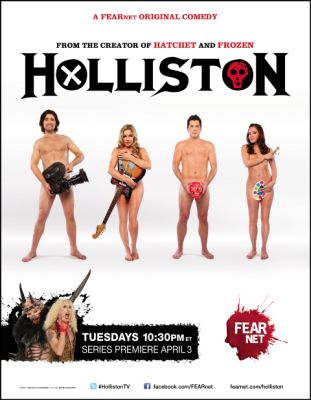 FEARnet — the burgeoning horror empire that consists of a website, cable channel and VOD service — has taken the next logical step and decided to move into the content provider business, and its first shot at original programming is Holliston, a situation comedy from the mind of horror maven Adam Green, premiering April 3.

Written and directed by Green, Holliston (FEARnet, Tuesdays, 10:30 p.m./9:30c) is something of a meta mixed bag, combining elements of horror, parody and satire, all presented in a fairly traditional multi-camera sitcom format. The series co-stars Joe Lynch (director of Wrong Turn 2 and the upcoming Knights of Badassdom) and focuses on the adventures of Adam (Green) and Joe (Lynch), two broke, aspiring horror filmmakers who have been best friends since childhood. Having finished college, they now share an apartment and work at a local cable station, hosting a schlocky horror movie show and making low-budget commercials.

In typical sitcom style, each episode finds Joe and Adam getting into various wacky predicaments, joined by cohorts such as Laura (Laura Ortiz), Joe’s offbeat bubble-voiced girlfriend, and Corri (Corri English), the girl Adam has been pining for since they broke up in college. Also showing up in each episode are Lance (Dee Snider), the cable station manager who is the lead singer in a Van Halen tribute band, and Oderus Urungus (GWAR’s Oderus Urungus), the imaginary alien who lives in Adam’s closet and appears whenever Adam needs some misguided advice.

The humor on display here is pretty broad and even crass, but Green has done something pretty smart with Holliston. He’s fashioned a sitcom that mocks sitcoms. For example, each episode features an obviously canned laugh track and characters who repeatedly break the fourth wall and make reference to the fact that they are in a sitcom. In fact, standard sitcom conventions are ridiculed so often that, when the jokes tank, it’s often hard to discern whether they were ever meant to be funny.

I received the first four episodes for review, and I have to admit that after the first one, I was underwhelmed. But each episode is better than the previous one. As actors, Green and Lynch are pretty good directors but, luckily, they’ve surrounded themselves with some charismatic co-stars. 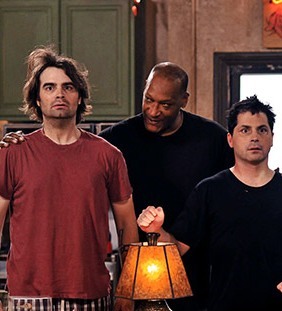 As Lance, Snider is over the top, which makes perfect sense for his character. Sure, Lance runs a TV station, but his true passion is heavy metal. Though he’s in his 50s, he still believes he’ll make it as a singer in a cover band. Accordingly, he always dresses like he’s on the Sunset Strip circa 1983, clad in spandex, makeup and platform shoes. Many boorish jokes derive from his androgynous nature — is he gay or not? Perhaps the answer to that question will make for a very special episode next season.

Lynch is probably the best lead actor, but co-stars English and Ortiz are Holliston‘s scene stealers — Ortiz especially. As the long-suffering Laura, Ortiz gets many of the best lines and handles them deftly, even though several of her funniest jokes fall flat because of poor editing choices.

Holliston will definitely appeal to lovers of horror. Green’s status as director of Hatchet and Frozen allows him to snag guest stars such as John Landis, Ray Wise, Tony Todd, Bill Moseley, Danielle Harris and Brian Posehn, names sure to catch the attention of many a cult film fan. Plus, each episode contains nods to iconic horror flicks, gross-out gags and the scatological comedy favored by exploitation movies.

And though most of the jokes land on the lowbrow end of the spectrum, Holliston has its share of smart moments. There are what pass for innovative shot choices not usually found in sitcoms, as well as clever verbal humor that, sadly, appears just often enough to make you wish there was more; it feels like Green doesn’t trust his audience enough to pick up on the witty stuff, so he stacks the deck with three crude jokes for every smart one.

It’s obvious Green is delighting in trying something new, and his enthusiasm and eagerness to entertain is infectious. Despite my critical mind, by the end of Holliston‘s fourth episode I was readily laughing along with the fake audience. Admittedly, I wasn’t always proud of myself but, hey, funny is funny.