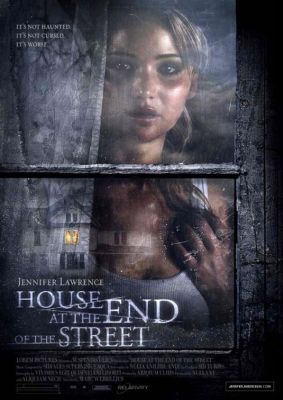 Poor Jennifer Lawrence. Currently fighting for her life on movie screens around the world in The Hunger Games, this talented young lady probably could use a break. But based on the trailer for her next film, House at the End of the Street, she won’t be getting one any time soon.

Directed by Mark Tonderai, House at the End of the Street finds Lawrence’s Elissa and her mom, played by Elisabeth Shue, moving to a new town after a major life event occurs and, of course, they pick the absolute worst possible house. Not only is it a “murder house,” but everything seems to run backwards.

I like both Lawrence and Shue, who’s perfectly cast as Lawrence’s mom, but I have my doubts about this flick and first among them is the fact that it comes from the pen of screenwriter David Loucka, who previously gave the world such stinkers as the Whoopi Goldberg “comedy” Eddie and last year’s frightful fiasco Dream House.

Also, it seems the flick’s costume designer decided to rip a ragged page from The Texas Chainsaw Massacre remake book and stick Lawrence in a snug tank top — in “Jessica Biel white” of course — for what looks to be large sections of the movie…or perhaps she only wears one for a couple of scenes and the marketing team decided to feature those heavily in the trailer. Either option raises red flags. Now what do you think? But wait, there’s more!

Another red flag: House at the End of the Street isn’t due until September 21, but here’s a trailer in March. Hmm, I wonder why they released it six months early? You don’t think it has anything to do with the success of The Hunger Games, do you?

And yet another red flag: The film’s release date has been pushed back a couple of times already. That’s rarely a good sign.

Fun fact: Weave all these flags together and you get what’s known in the movie biz as a colossal Tapestry of Caution — one large enough to wipe the tears of all the studio executives who will lose their job when House at the End of the Street tanks…even though it stars Jennifer Lawrence of The Hunger Games. Poor studio executives.

This article was posted in Updates & Teasers! and tagged David Loucka, Dream House, Eddie, Elisabeth Shue, horror, House at the End of the Street, Jennifer Lawrence, Jessica Biel, Mark Tonderai, Slammed & Damned, The Hunger Games, The Texas Chainsaw Massacre, Updates & Teasers, Whoopi Goldberg. Bookmark the permalink. Follow comments with the RSS feed for this post.Trackbacks are closed, but you can Post a Comment.