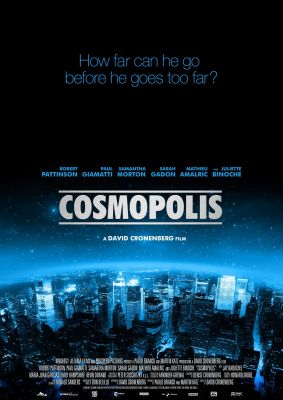 Anything David Cronenberg does gets a lot of buzz, but his upcoming adaptation of David DeLillo’s novel Cosmopolis is getting a little more than usual.

Now, this might be due to the participation of Twilight hunk Robert Pattinson. But based on the newly released teaser, the excitement is probably because Cosmopolis is awesomely twisted stuff —  in other words, classic Cronenberg.

In Cosmopolis, Pattinson stars as Eric Packer, a jaded 28-year-old Master of the Universe. The whole flick takes place in one day as Packer is chauffeured across midtown Manhattan to get a haircut.

As usual for a Cronenberg project, the film is packed with great actors, including Samantha Morton, Paul Giamatti, Juliette Binoche and Jay Baruchel, who is fast on the road to building a nice offbeat career as a character actor.

Pattinson has been trying hard to build a career separate from the whole Twilight phenomenon, starring in a variety of dramas and indie projects, but so far he hasn’t had much luck escaping his sparkly, brooding vampire fame.

In this regard, it’s tempting to read Pattinson’s role in Cosmopolis as a projection of his particular dilemma. Packer has fame and fortune, but he wants “more.” Hopefully, Pattinson’s performance here will allow him to work through these issues without resorting to the decadent escapades in which his character indulges in the trailer.

Oh, what the hell. He seems to be having a blast, right? What’s the point in being young, rich and pretty if you can’t enjoy at least a little depraved sex involving laser-sighted firearms…and is that a dinosaur?

Cosmopolis might not allow Pattinson to completely break free from Twilight’s greedy grasp and obtain the more he craves, but it’s bound to do more for him than Water for Elephants did.