Not One, but TWO New ‘Prometheus’ Trailers 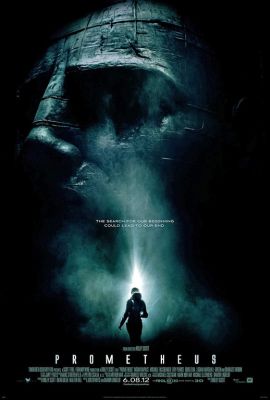 What can we say. When it rains, it pours.

Ridley Scott has been almost pathologically cryptic about Prometheus, his upcoming prequel/sequel to Alien that’s not really a prequel/sequel, except it is…sorta.

Beginning life as Paradise Lost, a project written by John Spaihts that Scott promised would contain “strands of Alien‘s DNA, so to speak,” Prometheus was born when genre-wunderkind Damon Lindelof came aboard and reworked the script into something more strongly linked to the Alien mythology.

Till now, we’ve had only a vague synopsis to go by, but with the release of a couple of new full-length Prometheus previews, we can finally get an idea of what Scott has in mind.

Based on these trailers — one each for the American and International markets — Prometheus is going to be a visually stunning sci-fi epic that looks a lot like a mixture of Alien, Blade Runner and 2001: A Space Odyssey. And if that’s not something to get excited about, I don’t know what is.

I think it’s interesting to notice these two trailers’ similarities and differences. Though they both share footage, the American trailer is much more dramatic and operatic in tenor than the International version, which is comparatively low-key and thoughtful. And this distinction carries over to each preview’s summary, to a disconcerting degree. Check it out.

International synopsis: “A team of explorers discover a clue to the origins of mankind on Earth, leading them on a thrilling journey to the darkest corners of the universe. There, they must fight a terrifying battle to save the future of the human race.”

American synopsis: “In the distant future, two superpowers control Earth and fight each other for all the solar system’s natural resources. When one side dispatches a team to a distant planet to terraform it for human colonization, the team discovers an indigenous race of bio-mechanoid killers.”

To be fair, the American version does contain the International description as well, but what does it say that the marketing team decided to add a war-mongering paragraph to the beginning of the U.S. summary? I know it’s common practice to release dissimilar trailers to different markets, but this profiling of audience tastes borders on disturbing…though, sadly, likely on target.

So, even now, the puzzle of Prometheus continues. What are we to make of Scott’s latest film? Is Prometheus a deeply considered meditation on the origins of life? Or is it a kickass action flick full of combative bio-mechanoid killers? Hopefully, it’s both, but I guess we’ll find out on June 8, when the movie hits theaters. Until then, thrill to the American trailer, then wind down by contemplating the International trailer.