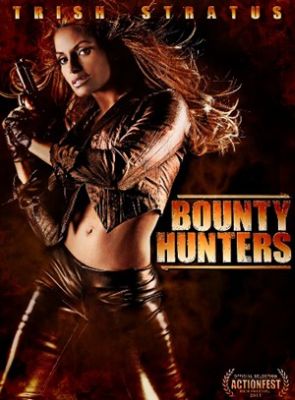 Of all the many and varied action movie subgenres, my favorite is probably the no-nonsense, low-budget, direct-to-DVD action flick.

These movies are comforting, akin to cinematic junk food. They don’t have to be good; they just have to deliver the goods. All that’s really necessary are some gnarly fights and/or gunplay, a little skin and a few jokes from a reasonably attractive cast. If the filmmakers can provide these elements, wrapped in a story that moves briskly enough to prevent me from thinking about the inevitable plot holes, then I’m a happy man.

Sadly, with the passing of the golden age of the video store, as well as the rusty age of Lorenzo Lamas and Steven Seagal, this once ubiquitous type of movie is rapidly becoming scarce. But it’s not entirely dead yet, and to prove it I offer the Canadian indie action flick Bounty Hunters.

With a gorgeous star, an amusing co-star, an unimaginative plot and plenty of hand-to-hand combat, Bounty Hunters is a perfect example of this type of straight-ahead B-grade action flick.

When the team gets a tip about a mob informant with a $100,000 bounty on his head, they track him down and head to jail. But when they get an offer of $1,000,000 to turn him over to the mob boss, they decide it’s too good to pass up. Times are hard and Jules’ other gig as a bartender at a strip club is not cutting it, especially since she’s soon to be fired for kicking the ass of handsy customers.

At the last minute, Jules’ principles kick in and she changes her mind, pissing off the mafia and putting the lives of her teammates Chase (Boomer Phillips) and Ridley (Frank J. Zupancic) in danger. The hunters becomes the hunted as they spend the rest of the movie trying to survive the attacks of various assassins and make things right. 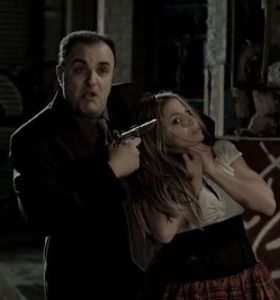 With Bounty Hunters (originally titled Bail Enforcers), McBrearty has delivered a competent, if uninspired, genre exercise. As a film, it’s pretty mediocre; the compositions are flat, the sets are decidedly low-rent and the performances are pedestrian. But as a star vehicle for Trish Stratus, it succeeds nicely.

I stopped following professional wrestling — or, as Ms. Stratus refers to it, “sports entertainment” — when I was around 10, so I had never even heard of Stratus before this, but she seems to have been a fairly big deal. And I can see why. Stratus is a very charismatic performer. Plus, she can really kick some ass.

As an actress, she’s not awful. Her line readings are a little stiff, but overall Stratus acquits herself well enough. But when she goes up against an opponent for a fight, she shines. Luckily, the flick is jam-packed with fights. Oh, for those that care, Stratus never gets naked, though she spends a good part of the flick in a school girl costume. (There is a little nudity, but just enough for me to write “there is a little nudity.”)

Over the course of the film, Stratus kicks ass in a gym, a house, a bar, a warehouse and an ambulance. I’m sure there’s more, but you get the idea. Bounty Hunters gives Stratus ample opportunity to do what she does best. Some of the fights look a little too rehearsed but, on the whole, they are well-choreographed and performed with enthusiasm.

My favorite bout takes place in an ambulance, and I wasn’t too surprised to learn that scene had to be partially improvised when they got on set and learned the space was smaller than planned. Here, Stratus goes up against Andrea James Lui, an actress who plays an assassin named Ruby, Jules’ finest opponent. Lui shares a couple of battles with Stratus, and those scenes crackle with excitement.

Among the other featured players, Boomer Phillips is the most entertaining. A Canadian comic, Phillips is always ready with a quick quip. Zupancic, who plays Stratus’ boss and love interest, is rather wooden. But he so looks the part of a heroic leading man, he gets away with it.

Bounty Hunters is recommended for those who are fans of cheap-ass action movies, girl-on-girl fights or Trish Stratus. And I imagine that if you’re still reading this, you’re bound to fall into one of those categories.