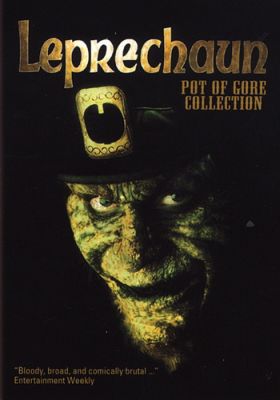 Gosh and begorrah, but isn’t it time to be wishin’ you a Happy Saint Patrick’s Day, boyo. And on this blessed occasion, before I get pissed and start acting the maggot, I need to act the tout and tell you that everyone’s favorite Irish imp is coming back for more malevolent mischief.

Variety is reporting that, thanks to a deal Lionsgate has made with WWE Studios (part of Vince McMahon’s World Wrestling Entertainment empire), the cult fave Leprechaun is going to be reimagined for a new generation. Of course, I’m not sure what they’re going to do with the little fella. He’s already done battle with Jennifer Aniston, claimed a sister wife, been to Vegas, been to “tha hood” (twice) and been to space.

WWE Studios chief Michael Luisi said,  ”[WWE has] been looking for ways to continue our relationship with Lionsgate and we saw Leprechaun as the perfect opportunity to take a well-known franchise and put a modern-day spin on it.”

Let’s see: a modern-day spin, wrestlers, leprechauns… Hmmm, I don’t know what they have planned (and I’m sure they don’t either), but it should be, umm, interesting. As is usual in modern-day moviemaking, where the deal is king, there currently is no writer, no director or actors attached, but the flick will definitely be released in 2013, or someone will get a folding chair to the back of the head.

But if you can’t wait until then for fresh evil leprechaun action, check out Syfy, which is running the first three Leprechaun flicks all day, culminating in the premiere of a brand-new movie about a short Irish terrorist, Leprechaun’s Revenge.

As you can guess, Leprechaun’s Revenge, starring Billy Zane, William Devane and Courtney Halverson, tells the tale of a leprechaun bent on revenge — but not just any revenge. No, this sprite is looking for “bloody” revenge, probably because someone stole his gold. Or his Lucky Charms. Or his whisky.

Whatever he’s upset about, tune in to Syfy tonight at 9/8c to watch him wreak havoc and demonstrate the origin of the old Irish proverb that warns “It is sweet to drink, but bitter to pay for.” Aye, but isn’t it the truth.