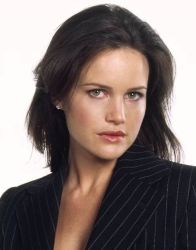 In news that has fans of strong women everywhere very excited, badass actresses Sigourney Weaver and Carla Gugino are teaming up for a TV show on USA.

Called Political Animals, the six-episode hour-long drama will go behind the Washington, DC scenes to look at the life and career of newly appointed Secretary of State Elaine Barrish (Weaver), a former First Lady who Deadline tells us is throwing “herself into the job after recovering from the dissolution of her marriage and losing the presidential nomination.” Sound familiar? Gugino will play Pulitzer Prize-winning newspaper reporter Susan Berg, a scoop-hungry journo looking to tear down Barrish.

This fictional look at a dynasty “weakened by political ambition, lust and greed,” which in no way is based on Hillary Clinton, comes from Greg Berlanti (Everwood and Brothers & Sisters) and Laurence Mark (Dreamgirls and Jerry Maguire), so even though it sounds somewhat hard-hitting, expect Political Animals to be a rather soapy affair.

While this is Weaver’s first shot at episodic television, Gugino has swung and missed at series success a few times, most notably with her unjustly canceled Elmore Leonard vehicle, Karen Sisco, where she starred as a tough, sexy U.S. marshal taking care of business down Florida way.

If you’ve been around here for any length of time, you can guess I’m pretty excited about this. I’ve made no secret of my admiration for Ms. Gugino, who’s equally at home in Sin City or on the Broadway stage. But I’m also a Sigourney Weaver fan; Alien was one of the great movie-going experiences of my formative fanboy years.

So, despite the lack of any ass-kicking or alien-thwarting, I’ll still tune in this summer to see these ladies work. And, who knows, maybe Weaver’s Secretary of State will deal with some extraterrestrial threat that Gugino’s reporter is forced to terminate with extreme prejudice. Hey, it could happen…