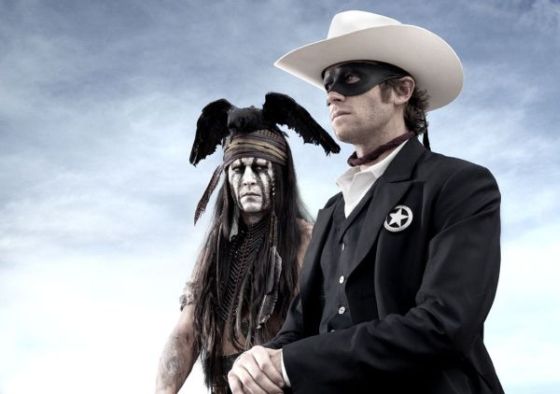 Gaze at the picture above and marvel at the eccentric appearance of New Millennium Lone Ranger and Tonto.

Disney’s press release informs us that this new take on The Lone Ranger comes “from producer Jerry Bruckheimer and director Gore Verbinski” and tells the story of “Tonto (Johnny Depp), a spirit warrior on a personal quest [who] joins forces in a fight for justice with John Reid (Armie Hammer), a lawman who has become a masked avenger.”

What it doesn’t mention is that when Disney finally agreed to make this movie after having stopped production, its conditions included a proviso that Tonto look exactly like Captain Jack Sparrow, a move that will better maximize Disney’s investment by ensuring the movie-going public recognizes that Tonto is played by the same actor who starred in all those mega-popular Pirates of the Caribbean movies. Plus, the wardrobe was already in the warehouse, so…