The New ‘MIB3′ Trailer, or ‘Once More With (Out) Feeling’ 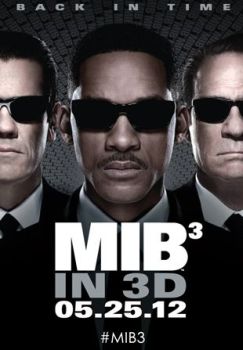 A couple of months ago, following months of reports detailing a very troubled production, we got a teaser for the new Men in Black flick; surprisingly, it didn’t suck. Now, we get a full-length trailer; not surprisingly, it kinda sucks.

That first peek spent most of its time reminding us what a Men in Black movie is and hinted at what we can expect from a new one. This new preview shows us more of what we can expect: tired jokes and a gimmicky time travel plot, seemingly engineered to allow Will Smith to, once again, play a brash fish out of water — a role more suited to a younger man. The producers (and Smith) might’ve done well to realize a 40-year-old mouthy punk isn’t especially endearing. Smith made me smile in the previous trailer; here, I kinda cringed.

The only saving grace might be Josh Brolin’s role as young Tommy Lee Jones. Though, here, even that is less fun than before. (Hmm, I’m sensing a pattern here, one that could seemingly transcend mere jokes and stretch to include the entire film.) I had hopes for Bill Hader’s take on Andy Warhol, but after seeing what was done with the character, I just shrugged and shook my head at an opportunity wasted.

If this is the best Men in Black III has to offer, I’d make other Memorial Day blockbuster plans if I were you. I hear Battleship is coming out. Oh, that’s right, it’s a movie (barely) based on the game Battleship.

Maybe The Avengers instead. Because, really, why pay premium prices for the latest entry in an overtired franchise starring Will Smith, or for a movie (barely) based on game older than Will Smith, when you can see a flick filled with enough superheroes to fill five movies. With all of them sharing the load, it will be years before they become as tired as Men in Black III, 3D or no 3D.