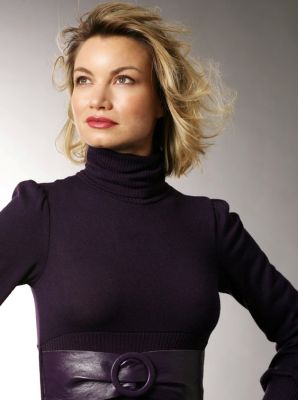 To put it mildly, Showgirls is a movie with a history.

Due to its salacious content, Paul Verhoven’s big-budget paean to boobs and backstage betrayal was notorious even before it hit theaters bearing an NC-17 rating back in 1995. And after it was released to bad reviews and worse box office, well let’s just say it earned a whole other type of notoriety.

Thanks to the wonders of home video, Showgirls eventually morphed into one of the most beloved cult flicks around. Over the years, it has gone on to have a second life full of rabid fans, midnight screenings and multiple DVD releases.

Most of the film’s stars have distanced themselves from Showgirls, but one woman has proudly stood behind it, so much so that she’s now considered the unofficial Showgirls ambassador. That woman is Rena Riffel.

Riffel is a multi-talented performer who’s probably best known for her appearance as Penny in Showgirls, though she’s been working ceaselessly since 1990. And as Showgirls has grown in stature, Riffel has stepped in to become its emissary, doing nonstop appearances and bringing the flick’s campy joys to an adoring public. Now, Riffel has taken the next logical step by creating a Showgirls sequel.

Showgirls 2: Penny’s From Heaven was written and directed by Riffel and continues the story of the first film, but focusing on the character of Penny Slot, which Riffel played in Showgirls. In that flick, Penny was an ingénue just learning the often slippery ropes of being a Vegas showgirl. Picking up almost 20 years later, Penny is still grinding it out on the Strip, but those stars in her eyes haven’t dimmed. As she pursues her dream of hitting the big time as a dancer, she’s forced to ask herself how far she’s willing to go and whether the result is worth the price. 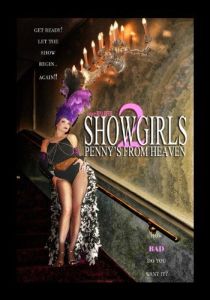 While that’s an accurate synopsis, it makes Showgirls 2 sound a little more serious than it appears to be. True, this is the tale of a woman chasing her dream, but it’s also a campy, no-budget avant-garde satire that seems to owe as much to the work of Andy Warhol and David Lynch as it does to Verhoven’s original film.

That’s not a complete surprise though. Riffel’s first flick as a writer/director was a campy, no-budget avant-garde satire called Trasharella Ultra Vixen, which created a mythology based around a young girl who comes to L.A. to become a star but, instead, morphs into Trasharella, a superhero whose mission is to protect starlets from the Hollywood Vampire, a foul beast sporting an accordion and a fez, who sucks away their innocence and dreams.

That film was a rather outré affair, full of surreal tangents and rambling digressions balanced by the occasional moment of odd beauty. With Showgirls 2, Riffel seems to have pulled back somewhat on her penchant for the peculiar, delivering a film that feels more like a movie and less like an experiment.

So far, Riffel’s new flick has received better reviews than the first Showgirls, but I imagine that’s because Riffel has intentionally crafted a campy spoof — unlike Verhoven, who crafted one unintentionally.

You can pick up a DVD of Showgirls 2: Penny’s From Heaven HERE, but if you’re interested in catching the flick on the big screen, it’s showing on March 3 at the Cinefamily Silent Movie Theater in West Hollywood at 10 p.m. Ms. Riffel will be there for what is bound to be an outrageous Q&A, so a good time is guaranteed for all. If you’re a fan of the willfully bizarre (and who isn’t), this event is highly recommended. Come for the movie; stay for the madness.

This article was posted in Other Awesome Stuff and tagged Cinefamily Silent Movie Theater, DVD, Other Awesome Stuff, Paul Verhoeven, Rena Riffel, Satire, Showgirls, Showgirls 2: Penny's From Heaven, Slammed & Damned, Theron Neel, Trailers, Trasharella Ultra Vixen. Bookmark the permalink. Follow comments with the RSS feed for this post.Trackbacks are closed, but you can Post a Comment.