Johnny Depp and Edgar Wright to Revive ‘The Night Stalker’ 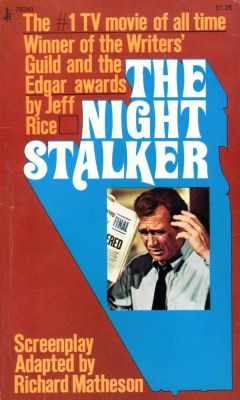 It’s beginning to look like Johnny Depp is stuck in the past.

Currently in production on Tim Burton’s reimagining of the ’60s gothic soap opera Dark Shadows and already set to shoot Gore Verbinski’s recently discounted Disney version of retro fave The Lone Ranger, Depp has taken steps to nail down his next project, one that also has roots in days gone by.

Last summer, Depp sold Disney on the idea of teaming with his production company, Infinitum Nihil, to produce a PG-13 flick based on The Night Stalker, the 1972 ABC TV movie starring Darren McGavin. Now comes news, courtesy of Deadline, that Disney has signed fanboy sensation Edgar Wright to direct Depp in the role of Carl Kolchak, the tabloid reporter with a penchant for bumping into things that go bump in the night.

I’m pretty jazzed about this. Back when I was a little monster kid, The Night Stalker was pretty much the coolest thing around. Written by genre master Richard Matheson (based on a novel by Jeff Rice) and produced by Dan Curtis (creator of Dark Shadows), The Night Stalker finds seedy, offbeat  reporter Kolchak on the trail of a serial killer who’s terrorizing the Vegas strip. As the bloodless bodies pile up, Kolchak can’t believe that he believes what no one else will believe: The serial killer is a vampire.

My love aside, perhaps the most important legacy of The Night Stalker is The X-Files, whose creator, Chris Carter, credits the Kolchak films and series as direct inspiration for the mysterious adventures of Mulder and Scully.

Wright seems to be a good fit for this flick, but this leaves me wondering about his long-promised version of Marvel’s Ant-Man, another project being made in conjunction with Disney. I’m sure it’s in the pipeline somewhere, but something tells me that Disney is more eager to appease Depp than Marvel, considering the comic book giant is now Disney property…and the cash cow Depp is not.