Will The CW’s Green Arrow Series Hit the Mark? 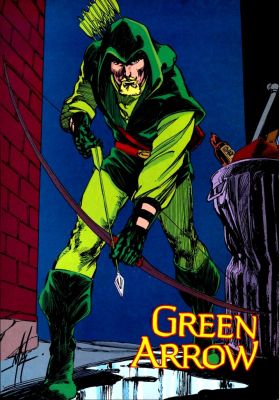 The CW is headed back to the comics. Once the home of Superman series Smallville, The CW is revisiting DC’s roster for Arrow, based on the crime-fighting archer Green Arrow. Why the “Green” was dropped, I don’t know. Maybe it didn’t test well.

Though both shows share a network, Arrow is said to be completely different tonally than the golly-gee vibe Smallville possessed. Specifically, The CW’s executive vice president of development Thom Sherman promises Arrow will be more grounded in “reality” than the network’s other beloved superhero series.

“[Arrow is] very provocative and sophisticated and edgy,” Sherman said. “It’s not as comic book-y as Smallville or other [superhero projects] from other networks . . . He doesn’t have any superpowers, he’s a very grounded character like a Jason Bourne — we use the term ‘Rambo.’ His skill-set is that he’s an archer, but he also has physical strength and prowess. He’s clever and able to devise ways of taking down a bad guy that are unique and fun to watch.”

It sounds like The CW’s Green Arrow (sorry, that’s his name, so I’m using it) will be less sociopathic vigilante and more undercover operative. Other sources claim Oliver Queen, whose secret identity is Green Arrow, will be a “wealthy playboy and billionaire industrialist-turned-outspoken politician.” From what I remember from the comics, those descriptions are close, or close enough to the comic book version to work.

Let’s back up and see how The CW officially describes Oliver Queen:

“A 27-year-old reformed bad boy, who after having spent five years shipwrecked on a tiny, brutally dangerous island in the South China Sea, returns to town a different man. Or to be more specific, a tortured, thoughtful master of the bow with a ferocious determination to make a difference.”

As crazy as that sounds, it’s close, or close enough to Green Arrow’s actual mythology. The truth is, like most comic book heroes, Green Arrow has had numerous origin stories. He was created in 1941 and since then, his history has changed and been altered numerous times. So, this tale is as good as any, I suppose. Like most TV shows, a lot depends on the casting.

For the role of Oliver Queen/Green Arrow, the producers have chosen Stephen Amell, who recently appeared on Hung and Private Practice. I’m not familiar with him, but let’s compare pictures of Amell and Green Arrow and see what’s what. 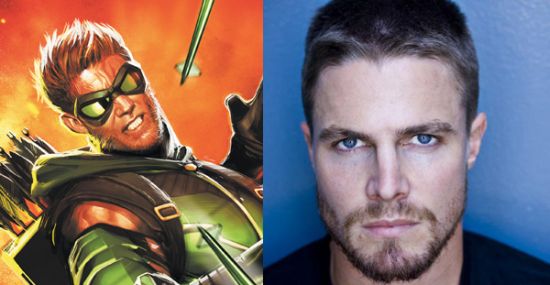 Okay, close enough — though my Green Arrow looks more like the photo at the top of the page. Who knows, maybe the producers will drop the frat boy Arrow and allow Amell to grow a Van Dyke. Though, on reflection, that’s unlikely. If “Green” doesn’t test well, I doubt a Van Dyke will. 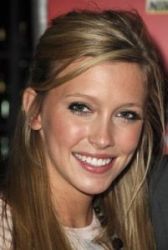 Joining Amell in Arrow will be Katie Cassidy. The very pretty Ms. Cassidy is the daughter of the very pretty David Cassidy, who old people like me know from The Partridge Family. The CW audience (i.e., teenagers) will know his daughter Katie from Supernatural, Gossip Girl, Melrose Place and the remake of A Nightmare on Elm Street.

Cassidy will be playing Laurel, a young woman who shares a past with Oliver Queen…a young woman who  is “determined to use her life as a one-woman war against the 1% following the death of her younger sister Sara. A sister, who as luck would have it, just so happened to have died aboard Oliver’s yacht.” Dum dum dum…

In the comics, Laurel is Dinah “Laurel” Lance, who goes on to become the superhero known as Black Canary. No word yet on whether Black Canary will spread her wings on Arrow. Perhaps it will depend on ratings, because the emergence of Black Canary would make for a very special “very special episode.” And who knows, maybe Black Canary will get her own show and steal Green Arrow’s thunder much as Xena did to Hercules back in the ’90s.

Of course, all this supposin’ is a little premature. So far, The CW has just ordered a pilot episode. We’ll have to see how this new, colorless toxophilite fares with The CW’s target audience this fall. Yes, I said “toxophilite.” Look it up.