Back to Camp for Another ‘Wet Hot American Summer’ 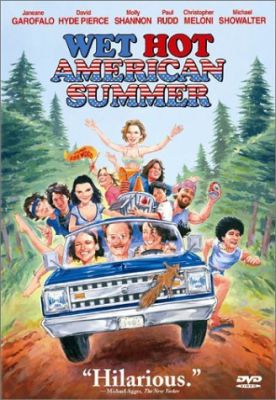 Of all the crazy cult comedies out there, Wet Hot American Summer may just be the cultiest.

Like any good cult flick, the film — a satire of summer camp movies such as Meatballs — bombed at the box office when it was released in 2001.

But over the years, also like any good cult flick, Wet Hot American Summer (directed by David Wain, and written by Wain and Michael Showalter, members of comedy troupe The State) developed a huge underground following.

And, yes, like any good cult flick, its rabid fans began clamoring for a sequel almost immediately. Now, 11 years later, it appears those fans could get exactly what they want.

Last night, Showalter appeared on Bravo’s reality gab fest Watch What Happens, and when asked about a sequel, he replied, “Absolutely yes. One hundred percent yes. The whole gang. Everyone’s back. We’re doing it.”

The gang to which he refers is the cast of Wet Hot American Summer, one of the better comedy ensembles ever assembled, including Paul Rudd, Janeane Garofalo, Molly Shannon, Christopher Meloni, Bradley Cooper, Elizabeth Banks, David Hyde Pierce and Amy Poehler, among others. Many of these actors have gone on to major success since appearing in the original film, so getting everyone back is quite a coup.

Showalter didn’t drop any hints about the movie’s plot, but in the past Wain expressed a desire to shoot a prequel using the exact same cast, set in “the same summer . . . so it would be 40-year-olds playing 16-year-olds.”

Considering the kind of wacky offbeat film Wet Hot American Summer is, this idea might just be crazy enough to work. In fact, it might be the only way it’ll work.