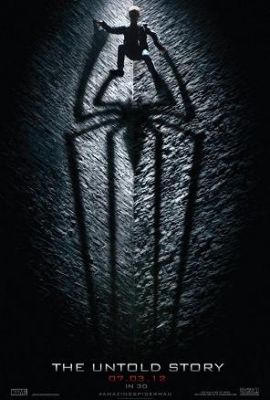 There’s a brand-new trailer for The Amazing Spider-Man, and I’m happy to report that it’s a bit more, umm, entertaining than the previous peek we received.

Last July, a teaser trailer made the rounds and it was a little on the dark side. This new preview of director Marc Webb’s reboot of Marvel’s teenage superhero retains a hint of that darkness but balances it with some humor, an important ingredient in the Spider-Man formula.

As much as I like Sam Raimi’s Spider-Man flicks, I never felt Tobey Maguire effectively embodied Spidey’s smart-ass side. Sure, he let fly the occasional quip, but they were always awkward and stilted. And though I worried after seeing the melancholy first trailer, here Andrew Garfield proves he can pull off the snarkiness that is one of Spider-Man’s defining characteristics.

We also get looks at Emma Stone’s Gwen Stacy, adorable with blonde tresses; Denis Leary as Gwen Stacy’s police chief dad, responsible for some laughs himself; and both flavors of Rhys Ifans: Dr. Curt Connors and the Lizard.

This trailer still possesses a touch of the sci-fi thriller angle on display in the previous glimpse we got, but thankfully the producers have allowed us to see that The Amazing Spider-Man, opening July 3, won’t be all doom and gloom. I hope Webb finds the right balance between sense of humor and sense of excitement. That’s a precarious web to sling, but one on which Spider-Man depends.