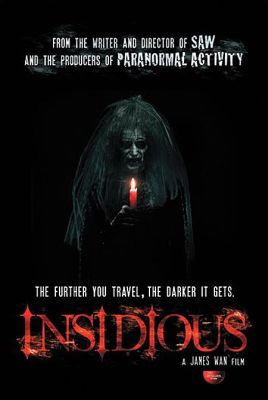 It looks like Insidious, one of the better spook house flicks in recent memory, is coming back to haunt us once again.

It should come as no surprise that a deal for a sequel to the unexpected 2010 hit from director James Wan and writer Leigh Whannell, the team responsible for that launched the Saw franchise, is near completion — Insidious cost $1.5 million to make and grossed almost $100 million. The only real surprise is that it’s taken this long to set up another one.

And I’m sure the sequel would’ve been arranged much sooner had the powers that be taken the usual route followed when milking a cash cow; namely, attaching a new writer, director and cast ASAP and giving the original filmmakers producer credits. But I’m comforted to learn that’s not what’s happening here.

The plan for what I’m dubbing More Insidious is that Wan and Whannell will return and reassemble the original lineup to see if they can recreate the magic of the first flick. This is a refreshing break from recent Tinseltown tradition.

“Insidious was the most fun project I’ve ever worked on,” Whannell said when announcing the sequel. “I believe that James Wan and I achieved what we set out to do — create a horror film for horror fans . . . Both of us feel that we can mine more terror from the world we created and know that if we assemble every member of the original team, we will have an amazing continuation of the story for fans of the first film.”

It sounds like they want to get Rose Byrne and Patrick Wilson back as the tormented parents of the tormented son played by Ty Simpkins. But based on the end of the original film, psychic Lin Shaye won’t return, which is a bummer because she’s awesome. This sounds a lot like the template followed by that other famous franchise — you know, the one from which Insidious took so many cues. That’s right, Poltergeist. Hopefully, Wan and Whannell can avoid the woeful missteps taken when extending that story.

Oooh, here’s an original idea: Someone should make a good movie and not make an unnecessary sequel. I know, I know. That’ll never happen. We all know the way original ideas fare in Hollywood — they’re completely ignored, unless they make $100 million, in which case…well, you know.