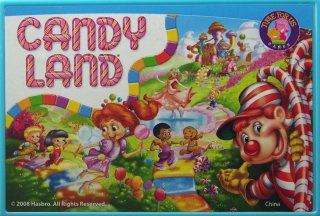 Just the other day, we were talking about Universal Pictures growing a pair and refusing to do every embarrassing thing demanded by its shrewish wife, Hasbro, such as making a Stretch Armstrong movie or a Ouija board movie or, apparently, a Candy Land movie.

To get even and show Universal that it’s still desirable, Hasbro has decided to get a little on the side from seemingly whoever will buy it a drink. First, Hasbro hooked up with Relativity Media for a bit of harmless Stretch Armstrong “brand re-imagination.”

Now comes word that Hasbro is also involved in a corporate ménage à trios with Columbia Pictures and Adam Sandler’s Happy Madison Productions, all of whom will rent a room for a little game of “Candy Land.” And the worst part? They’re going to film it. Ewww.

Director Kevin Lima (Enchanted) is on the hook to bring the board game to life, and Sandler will star and write the script with Robert Smigel, best known as the creator of Triumph the Insult Comic Dog and the notorious cartoon The Ambiguously Gay Duo. If there’s any hope for this flick, it lies in the ability of Smigel to work something subversive into what is sure to be a gooey, treacly mess that’s likely to stain.

I’m sure it won’t be long till Hasbro manages to give away its Ouija board and Monopoly rights to anyone who tells the toy-making giant it’s still pretty. Oh, Hasbro, have you no shame?