Universal Regains its Senses, Says No to ‘Stretch Armstrong’ 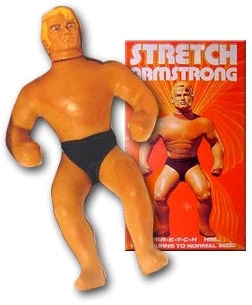 It seems Universal Pictures is slowly breaking the spell cast upon it by Hasbro. You know, the spell that caused Universal to think that people wanted to see movies based on toys like Stretch Armstrong. And though it’s kind of sweet that Universal is reclaiming a little much-needed self-respect, it doesn’t mean we won’t eventually be subjected to the indignities of a Stretch Armstrong flick.

While it has done pretty well with Hasbro’s Transformers, not quite as well with G.I. Joe and, based on its recent change in marketing strategy, seems prepared to have its Battleship sunk, Universal has drawn the line at giving the world a Stretch Armstrong movie.

Apparently the thought of having to smile and say nice things about a film based on a stretchy muscled doll clad only in tight black shorts was just too much, especially one starring the walking squint known as Taylor Lautner — and that’s saying something considering Universal is the studio that gave us Your Highness and Dream House.

Universal has also passed on movies based on Hasbro products such as Monopoly, the Ouija board, Clue and Magic: The Gathering. No word on the planned Candy Land and Risk flicks, but hopefully Universal can maintain its newfound dignity and stand strong. We salute you, Universal. If you find yourself weakening late one night, please give us a call and we’ll talk you through.

But just because Universal has made enough money on Hasbro’s best toys to discard the worst doesn’t mean other production companies wouldn’t like a taste.

Relativity Media co-president Tucker Tooley just announced his company would be happy — nay, “thrilled” — to pick up Stretch Armstrong and play a little game of “brand re-imagination.” But they’ll have to do it without Lautner, who is no longer attached. That’s kind of sad, because Stretch Armstrong might be the perfect role for Lautner. There would likely be little acting required, and he already has the physique. All he’d have to do is dye his hair yellow and, umm, stretch?

According to Hasbro’s CEO, Brian Goldner, “Stretch Armstrong is a great example of Hasbro’s rich portfolio of intellectual properties that we are continuing to develop globally.”

You gotta love the movie biz. Only in Hollywood would Stretch Armstrong be considered a great example of intellectual property.