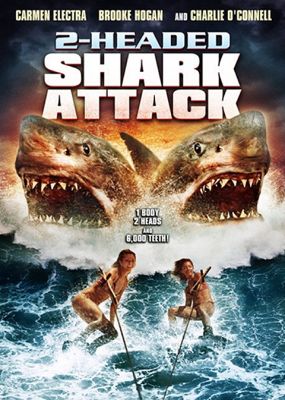 I just returned from the post office with a brand spanking new copy of 2-Headed Shark Attack (which hits DVD shelves on January 31), the latest entry in The Asylum’s beloved “Nature Run Amok” horror/sci-fi series. And as I drove home, I couldn’t decide what to think. Sure, it has a shark, with two heads no less, and The Asylum usually does okay with sharks (Sharktopus). But 2-Headed Shark Attack was directed by Christopher Douglas-Olen Ray, and his record at The Asylum is spotty at best, even with mutated sharks (Mega Shark vs. Crocosaurus).

One thing is certain: This isn’t one of those creature features where they make you wait around for the monster to show up. 2-Headed Shark Attack gets right to it, with the two-headed shark making an entrance about 3 minutes in and proving his ferocity by quickly downing an appetizer of two bikini-clad water-skiers before moving on to a main course consisting of, well, pretty much the rest of the cast.

Let’s get that messy synopsis out of the way. A group of college kids are in the midst of a Semester at Sea cruise, which is just what it sounds like — the ship is a floating classroom, led by Professor Babish (Charlie O’Connell), an instructor who doesn’t seem to be very good at instructing. But, that’s fine because he’s married to Carmen Electra…oops, I mean Dr. Anne Babish (Carmen Electra), a physician whose specialty appears to be sunbathing, at which she seems to excel.

It isn’t long before the ship gets both a shark (one-headed) caught in its propellers and a breach in its hull. Luckily, there’s an atoll nearby, so the professor and his students decide to decamp to the island while the captain makes repairs. Carmen Electra warns her husband that it’s a bad idea and opts to stay onboard the ship and work on her tan. And that’s a perfect illustration of the kind of movie 2-Headed Shark Attack is — it’s a movie in which Dr. Carmen Electra is the voice of reason.

It’s also the kind of movie where bikini-clad college student Brooke Hogan can fix an outboard motor, weld underwater and scuba dive, despite a traumatic backstory that has kept her from swimming since childhood.

And, finally, it’s the kind of movie where Bikini Babes #5 and #6 decide the scenery is so beautiful that it would be a crime if they didn’t remove their tops and have a mostly girl-on-girl three-way with Douchey Dude #4 in the only nude scene, likely inserted to help with foreign distribution, and during which they all, of course, become two-headed shark food. 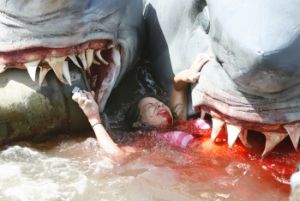 And what about this two-headed shark? He’s not the shy type, like the great white in Jaws. This monster has almost as much screen time as the second-billed Brooke Hogan, which is a shame because the two-headed shark is pretty cheesy — and not good cheesy.

And what about Brooke Hogan? Actually, she’s not too bad. She’s at least as good as first-billed Carmen Elektra and definitely better than third-billed Charlie O’Connell. But she’s not as good as way-below-the-title-billed Christina Bach Norman, who plays Dana but would be more easily identified as Partially Clothed Babe (most all the other actresses are Bikini Babes so, yes, if you want to see girls in bikinis, this is your movie).

I’ve now written more than 800 words, but I really haven’t answered the question I suggested in the first paragraph: Is 2-Headed Shark Attack a good “bad” movie or a bad “bad” movie? Why, that’s a good question. Thanks for asking!

Let’s just say director Christopher Douglas-Olen Ray has delivered a flick that’s safely in line with the others he’s made for The Asylum. In other words, it’s neither a good “bad” movie nor a bad “bad” movie. No, 2-Headed Shark Attack is a mediocre “bad” movie — and that just might be the very worst kind of “bad” movie.