Is ‘Powers’ in Peril?

If you follow me over at Planet Fury, you might remember that Powers, the comic book by Brian Michael Bendis and Michael Avon Oeming, was being adapted into a television pilot for FX, the basic cable network that specializes in edgy original programming. Well, the project has hit a few snags recently.

Last November, it was announced that FX was not happy with the pilot and had decided to retool and reshoot it. At that time, Bendis was pretty upbeat about the situation, saying, “[That FX is] spending more [money] on Powers is good. They did the same to the Sons of Anarchy pilot. FX sees pilots [differently] than [regular broadcast] networks . . . The pilot was crazy expensive and very lovely and shows incredible potential for a long series . . . The reshoots are planned for January and are all about tone and clarity. I am very proud of the pilot, as is [Oeming].”

The comic is a professed favorite of FX president/general manager John Landgraf, so Bendis had good reason to be optimistic. But now, Landgraf seems to be cooling a bit.

According to The Hollywood Reporter, during the recent Television Critics Association winter tour, Landgraf announced the future of the pilot is in question.

“We didn’t pick the pilot of Powers up,” said Landgraf. “We went back and Chick Eglee, who had written it, did a fairly substantial rewrite that would require pretty extensive reshoots of the pilot. Right now we’re in the process of deciding whether to pull the trigger on the reshoot.”

Though I’m a major fan of Powers and would love to see it onscreen, I’ve always thought it would be a tricky proposition to adapt it to another medium. The book, a superhero police procedural in the vein of NYPD Blue, has a particular tone that would be hard to translate effectively, and Landgraf seems to agree.

“This is as difficult an adaptation as I’ve ever worked on,” Landgraf said. “Difficult adaptations interest me, but this is a really hard one. When you think about a 10 o’clock drama — a Sopranos-esque drama or any serious drama — there’s never been a feature film or TV series that’s taken the superhero genre into that type of tonality; it’s never been done and it’s just really a struggle.

“But until Game of Thrones,” Landgraf continued, “I don’t think anybody had ever taken the fantasy genre into a 10 o’clock drama territory either. I have enormous respect for HBO, and for David Benioff and everybody who was involved in that show, because they managed to pull it off. So, it can be done, it’s just proving really difficult.” 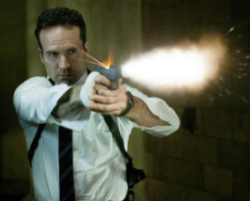 Despite this news, Bendis remains optimistic, recently writing on Twitter, “Still in limbo is not the end of the world. Never pity a guy with a TV deal. Lots of smart people working on it right now. Stay tuned.”

I hope the powers that be can make it work. There’s a lot of talent involved in this project. The cast includes Jason Patric, Lucy Punch, Titus Welliver, Charles S. Dutton and Carly Foulkes, the cute new T-Mobile girl. On board as executive producer and writer is the aforementioned Charles H. “Chick” Eglee, a veteran writer/producer who previously worked on The Shield, Dexter and The Walking Dead, where he helped turn a comic that’s not nearly as awesome as Powers into must-see TV.

Final decisions will be made in a couple of months, so cross your fingers. If Eglee can make zombies work as good television, surely he can do the same with superheroes. Let’s hope Landgraf agrees.