A Bumpy Path — Down the Road

People really love slasher flicks. They never seem to go out of style and probably never will. The reason for this is simple: Slasher movies are stripped-down formula filmmaking, and when they’re done right, they’re extremely effective. But when they’re not done right, well, you know.

Down the Road, writer/director Jason Christopher’s recent entry in the slasher subgenre, is just such an exercise in stripped-down formula filmmaking. And though Christopher’s film gets a lot right, it never quite overcomes what it gets wrong.

Christopher puts all the pieces in place and begins solidly by developing a believable new mythology, something not enough of these movies bother to do. Years ago, a young girl was killed by a drunk driver. Soon after, her father disappeared. It’s now whispered that he is holed up in the woods, where, using a variety of retro implements that are charming in their low-tech minimalism, he brutally kills any carousing teenagers who happen by.

Cut to a group of carousing teenagers making plans to go into these very woods despite the fact they know this story. After they arrive, set up sex tents and gather around the campfire for beer and the tale of the menacing low-tech killer…well, I don’t have to tell you what happens.

Almost everything that happens in Down the Road is totally predictable. And what isn’t totally predictable, and therefore interesting, is undercut in some way: the group of teens is made up of all the usual types (nice girl, nice guy, dumb jock, party girl, troubled girl), but the one character that is somewhat original (a guy who’s a space case) is dispatched in fairly short order; a lot of time is spent setting up the promising plot point of the troubled girl’s troubles, but it never pays off; the killer gets his expository scene where he explains why he kills, which would be fine if we didn’t already know why — in fact, it would still be fine if the scene didn’t take so long and stop the movie in its tracks.

All these issues relate to Christopher’s script, which was mentored by Victor Miller, writer of the first installment of the Friday the 13th franchise. This might have been something of a mixed blessing. Although it’s quite an accomplishment for a young moviemaker to have his screenplay shepherded by the creator of one of the most successful horror flicks ever made, no one is every going to accuse Friday the 13th of being a well-written film. While it’s clear that Christopher’s script would’ve benefitted from another couple of drafts (actually, most would), remember that film is a visual medium, and it seems that area is where Christopher’s strengths lie. 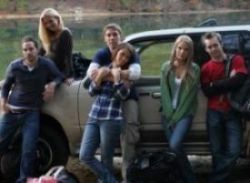 Christopher’s screenplay might be weak, but his visual storytelling is top-notch. The camera always finds the interesting angle and his shots are blocked, framed and composed well. The film’s pacing stutters occasionally, but Christopher is a skilled editor, crafting many effective moments full of tension and dread. Sadly, these are periodically undermined by an overblown score that demands when it need only suggest.

He’s also good with his actors. Christopher gets a decent work from all, but the best of the group are Jen Dance as the troubled girl, Chelsey Garner as the nice girl, Chris Ready as the space case and Brian Gallagher as the menacing low-tech killer. The rest of the cast tends to fade into a big, attractive blur.

Despite its narrative problems, Down the Road is certainly not a bad little flick. Though well-crafted, it just never manages to find solid footing. Christopher possesses a fine visual sense and a solid grasp of filmmaking technique, but his writing skills aren’t as developed. The end result is a film that never manages to rise above the pack and distinguish itself in an already overcrowded field of ‘80s-influenced slasher flicks.