The Cast of ‘Being Human’ Goes Dark 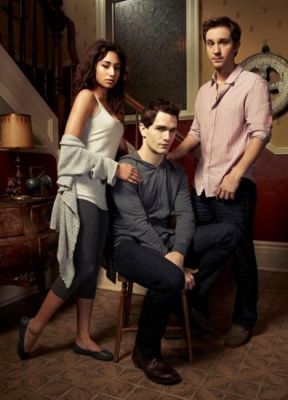 Being Human, one of Syfy’s strongest original programs, returns tonight with a season of 13 new episodes that find roommates Sally, Aidan and Josh taking a walk on the dark side, and liking it.

Based on a popular British series, Being Human (Mondays, 9/8 p.m. CST) is the story of a ghost, a vampire and a werewolf who are wrestling with what it is to be a monster in the real world. Of course, their monstrousness is actually a metaphor for the plight of The Outsider, something we all can relate to.

In season one, our heroes were dealing with the horrors of their past while also trying desperately to maintain their humanity. But based on a question-and-answer session with the show’s cast, the gloves are off and the roommates are giving in to their appetites in a new season that could easily be subtitled “Monsters Behaving Badly.”

Meghan Rath, Sam Witwer and Sam Huntington (ghost Sally, vampire Aidan and werewolf Josh, respectively) were in fine form during the press conference last week. Jokes of questionable taste flew fast and furious as the trio talked to journalists about all things Being Human.

After the session was over, one thing was obvious: Everyone involved is thrilled to return. “I think I can speak for all of us when I say that we were all really, really excited to get back,” Huntington said.

Witwer concurred, saying while season one was tiring, this year felt easier. “There was something about having a successful season one behind us and knowing the characters and having that momentum that was really positive this year.”

“Scriptwise,” Rath said, “it was a lot easier to just fall back into it this year because there was no establishing who our characters were and what our circumstances were; we just jumped right into it.”

But it’s always smoother sailing when you have a hit on your hands. Last season, Being Human averaged almost 2 million viewers per episode, making it Syfy’s most successful new series in years.

Part of that success was the surprising fact that the show’s audience was 53% female, making Being Human the network’s strongest female draw ever — and a distinct oddity in the man’s world of genre programming.

The show’s storylines might have something to do with that feminine appeal. While Being Human is definitely a horror series, the focus is on character. Sure, there is plenty of gore and sex, with an inordinate number of hunky actors in various states of undress. But the larger themes deal with strong, relatable emotions.

Rath believes the show’s popularity is due to its particular approach. “I think, for me, it’s important to keep in mind that these are real people and not to get sucked into the supernatural element of the whole thing,” Rath said. “What makes the show different is that we are trying to play these as regular people.”

But season two is shaking things up by placing these “regular people” into situations that are anything but ordinary.

“[The coming season is] extremely different,” Witwer revealed. “If season one was about putting these people who are at risk into a safe environment, well season two is all ‘what is that risk about?’ And basically what it means is, these people are in trouble and we’re going to see a lot of that trouble . . . things get a little bit darker this year.”

Huntington continued the thought. “This season, I’ve got to say I was shocked at some of the stuff that we shot. It really is very, very dark emotionally and you can’t really believe the characters are doing what they’re doing at certain times.”

It would be hard to go much darker than last season. I pointed out that in season one of Being Human, the producers broke the ultimate taboo by killing a child, which caused Witwer to joke, “Syfy kills a lot of children, from back in the Battlestar Galactica days to even now — Syfy 17, Children 3. The score doesn’t lie.”

At this, Witwer’s castmates broke into laughter and Huntington quickly chimed in, “At least the children won three of them, you know what I mean?”

And that’s the kind of offbeat interplay and chemistry that keeps me coming back to Being Human week after week. Sure, I love horror and gore as much as, and maybe more than, the next guy. But a show can survive on shock for only so long. The heart of Being Human is the relationship of the three main characters. And television is all about relationships.

If a series can put characters you enjoy into situations that compel, there’s a good chance it will be around for a while. So far, the producers of Being Human have done just that. Tonight, we’ll see if they can continue to entertain even as the gloves come off. But I think we can all agree, that’s when the real fun usually starts.

This article was posted in Interviews and tagged Battlestar Galactica, Being Human, horror, Interviews, Meaghan Rath, Planet Fury, Sam Huntington, Sam Witwer, Slammed & Damned, Syfy, television, Theron Neel, Trailers. Bookmark the permalink. Follow comments with the RSS feed for this post.Trackbacks are closed, but you can Post a Comment.