Movies like The Big Bad frustrate me. It’s clear there’s talent involved, but in service of what? The filmmakers obviously had some cool ideas, but they’ve been stitched together in such a way that we’re not provided an emotional context, and by the time we are provided one, it’s too late.

Think about it like this: A talented seamstress delivers to you a nicely made winter coat, but with no buttons. The coat is okay and all but, man, it really needs some buttons.

As a werewolf riff on “Little Red Riding Hood,” The Big Bad does have a plot, but the tale is told in what is essentially a series of three setpieces that seem more concerned with style than story. I guess these sections could be described as acts, or chapters, but they don’t actually have the structure for that to be accurate. Though a narrative arc does eventually become apparent, it feels almost like an afterthought.

The Big Bad opens with setpiece #1, in which Frankie (Jessi Gotta) walks into a bar, looking for answers. She meets a girl named Molly (Jessica Savage), who we’re supposed to feel sorry for, but since we don’t know why we should feel sorry for her, she just comes across as an obnoxious mess.

This first section wanders along aimlessly, taking 20 minutes to do what it could’ve done more effectively in half the time. I spent the majority of that extra 10 minutes distracted in my attempts to ascribe meaning to events that seemed random, which is how humanity came up with religion. Luckily, Molly eventually provides some clues and, yes, we eventually discover why we should feel sorry for her. Though by the time we do, she’s gone, having served her purpose, and we’re on to the next setpiece. 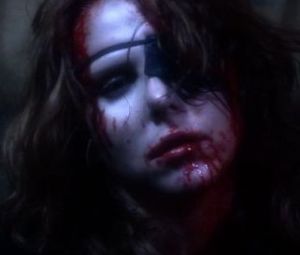 Setpiece #2 starts strongly, giving us some welcome expository information. But then it jumps to a segment, featuring a very good Alan Rowe Kelly, that seems designed primarily to trot out Jane Rose’s gory practical makeup effects and to allow the filmmakers to reference Thriller: A Cruel Picture…or maybe that was just me looking for religion again.

Then The Big Bad moves into its final segment, where it’s all made clear. But getting there has been such an episodic journey, shaped in such a way to prevent us from forming the necessary emotional bond with the characters, it doesn’t truly pay off. The filmmakers haven’t earned it.

Adding to the flick’s arbitrary feel is the visual palette employed by director Bryan Enk and cinematographer Dominick Sivilli. With its desaturated colors and hazy look, The Big Bad is reminiscent of the independent films of the 1990s. But occasionally, for a few minutes at a time, the movie explodes into color. When this would happen, I would again try to intuit what the director was doing (“Ah, I see. As Frankie gets more pieces of the puzzle, the world blooms into color!”). But then, the color would fade and, defeated, I’d have to adjust my interpretation, until I finally gave up.

The one thing that really works well throughout and makes The Big Bad worth seeing is Jessi Gotta’s performance. Gotta has a natural screen presence and is always interesting to watch. Gotta is able to make Frankie sympathetic and interesting even when the script, written by Gotta, seems designed to prevent it.

I’m sure the filmmakers could argue that I don’t appreciate their vision, and perhaps that’s true. Granted, there are some cool moments and effective imagery in The Big Bad, but not enough to make me care about the rest. But, hey, maybe I just prefer a coat with buttons.