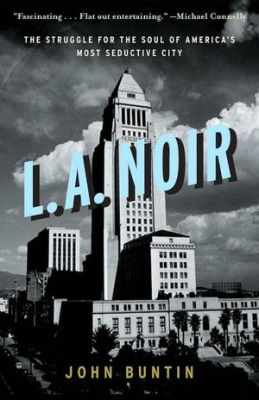 Frank Darabont, the man who once brought the zombie apocalypse to AMC, is now bringing film noir to TNT.

As his first project after leaving The Walking Dead, Darabont has chosen L.A. Noir, an adaptation of L.A. Noir: The Struggle For The Soul Of America’s Most Seductive City, the true crime book by John Buntin, which Publisher’s Weekly says “chronicles the complex, interlocking lives of brutal gangster Mickey Cohen and durable police chief William Parker, telling their stories against the backdrop of Tinseltown from the 1930s to the ’60s.”

This project is something of a departure for both Darabont and basic cable network TNT. As a director, Darabont has brushed up against crime dramas a few times (The Shawshank Redemption, episodes of the TV series Raines and The Shield), but he’s best known for his work in horror. And TNT airs plenty of procedurals, but the closest thing to L.A. Noir the network currently has is the gritty LAPD drama Southland, which it picked up after the show was canceled by NBC for being, well, too gritty (or for low ratings, depending on whether you believe the weasely network weasels).

It seems Darabont has reined in the book’s wide scope somewhat. According to Deadline, L.A. Noir will be a “fast-paced crime drama set in Los Angeles during the 1940s and ’50s.”

Michael Wright, TNT’s head of programming, said, “This project is a sweeping tale of the battle for the soul of the city that was waged between the forces of the LAPD and the West Coast mob.” So, it sounds like what we’ll be seeing is essentially a small-screen version of L.A. Confidential, which is more than okay with me.

Darabont appears pretty excited about this upcoming change in genres. “Noir is a passion of mine,” Darabont said, “so I feel blessed to delve into a project that speaks in the hardboiled vernacular. John Buntin’s superb book, though non-fiction, is our touchstone and inspiration for the stories we’ll be telling, weaving fiction throughout the facts and facts throughout the fiction . . . The goal is to deliver on the tone that the title L.A. Noir promises: a smart, gritty, authentic, period noir drama.”

A smart period noir drama full of hardboiled language might be a hard sell to prime-time viewers. But if Darabont can somehow keep that promise, I’ll be there every week, in my fedora and trench coat, getting lost in a dark, stylish world of flatfoots, roscoes, dames and palookas. Now, go climb your thumb, gink, before I croak ya, see.

This article was posted in Other Awesome Stuff and tagged AMC, Deadline, film noir, Frank Darabont, John Buntin, L.A. Confidential, L.A. Noir, L.A. Noir: The Struggle For The Soul Of America’s Most Seductive City, Michael Wright, Other Awesome Stuff, Publisher's Weekly, Raines, Slammed & Damned, Southland, television, The Shawshank Redemption, The Shield, The Walking Dead, Theron Neel, TNT. Bookmark the permalink. Follow comments with the RSS feed for this post.Trackbacks are closed, but you can Post a Comment.