Debbie Rochon and Tiffany Shepis Suffer the ‘Wrath of the Crows’ 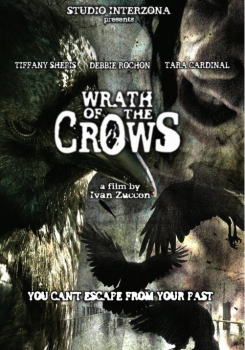 We just got the trailer for a new horror movie called Wrath of the Crows from Italian director Ivan Zuccon. And, boy, this flick appears to have everything fans of Eurohorror could possibly ask for: mutilation, nudity, gore, degradation, torture, grue-filled kills, moody lighting and, of course, opaque dark symbolism that probably means something, but who cares when you have all the mutilation, nudity, gore, degradation, torture and grue-filled kills.

Oh, I should also mention the best reason to see it: Wrath of the Crows stars Tiffany Shepis and Debbie Rochon!

Both Shepis and Rochon have worked with Zuccon before — Shepis on the almost-impenetrable Nympha, and Rochon on Colour from the Dark, one of the director’s many H. P. Lovecraft adaptations. But Wrath of the Crows, like Nympha, is an original story that, based on the convoluted synopsis, threatens to be cool to look at but hard to follow. I’ll attempt to run it down for you.

Larry, Deborah, Hugo, Hernest and Liza awaken to find themselves imprisoned in a dank and dirty jail, forced to submit to the humiliating tortures of their captors. Suddenly, a sensual new prisoner, the Princess, arrives dressed in crow feathers and, surprise, she causes quite a stir. It soon becomes clear that she possesses a singular strength and strange supernatural powers. Then, there’s something about “rude nightmarish projected images” and being unable to “escape from yourself or your past.”

There’s a good chance that description did little to pique your interest. But watch the trailer for Wrath of the Crows and remember: Debbie Rochon, Tiffany Shepis and Tara Cardinal. What? You’ll check it out after all? Yeah, me too.

This article was posted in Other Awesome Stuff and tagged Brian Fortune, Colour from the Dark, Debbie Rochon, Domiziano Arcangeli, Eurohorror, H. P. Lovecraft, Ivan Zuccon, Nympha, Other Awesome Stuff, Slammed & Damned, Suzi Lorraine, Tara Cardinal, Theron Neel, Tiffany Shepis, Trailers, Wrath of the Crows. Bookmark the permalink. Follow comments with the RSS feed for this post.Trackbacks are closed, but you can Post a Comment.