‘The Victim’ Picked Up by Anchor Bay 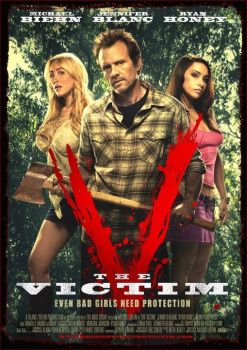 We have good news for all the grindhouse geeks out there. Anchor Bay has “locked in North American rights” to Michael Biehn’s kickass writing and directorial debut, The Victim.

A ‘70s-style exploitation flick starring Biehn, Jennifer Blanc and Danielle Harris, The Victim is a ballsy revenge tale that has been making the rounds on the film fest circuit and racking up honors along the way.

“This is a great grindhouse film, and audiences won’t be disappointed,”  said Anchor Bay Executive Vice President, Acquisitions and Co-Productions, Kevin Kasha. And I have to agree. When I saw it at SplatterFest last year, the crowd went wild before, during and after the screening.

The relationship between Biehn and Anchor Bay is something of a lovefest, as well it should be. “From the first day of shooting,” said Biehn, “I had hoped that Anchor Bay would be interested in The Victim. I’m very happy they will be working with us to distribute it . . . I loved making such a down-and-dirty film — true grindhouse.”

With deep roots in horror and cult film, Anchor Bay is the perfect partner for this flick. It’s not clear exactly what the phrase “North Americans rights” covers, but I assume it involves specialized distribution into art houses around the country. When I talked to Biehn and Blanc at SplatterFest, they confirmed there was also a deal in place to put The Victim into colleges all over the U.S. Hopefully, there will be a DVD deal following soon.

I’m glad Anchor Bay is passionate about this flick. The Victim is the type of film rarely made these days. Who knows, maybe this will start a trend: cool movies that people are actually excited to see! Hey, it could happen.

This article was posted in Updates & Teasers! and tagged Anchor Bay, Danielle Harris, exploitation, grindhouse, Jennifer Blanc, Kevin Kasha, Michael Biehn, Slammed & Damned, SplatterFest, The Victim, Theron Neel, Updates & Teasers. Bookmark the permalink. Follow comments with the RSS feed for this post.Trackbacks are closed, but you can Post a Comment.