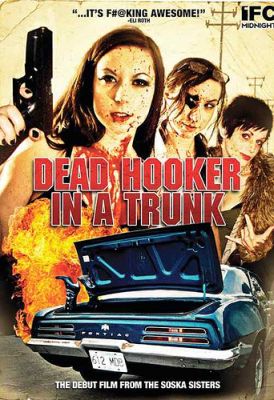 This just in from the “It’s About Time” desk:

Dead Hooker in a Trunk, the Soska sisters’ Canadian grindhouse spectacular, is getting a first-class Region 1 DVD release — nearly three years after its completion.

It’s been a long haul for Jen and Sylvia Soska’s Dead Hooker. What began as a film school project morphed into an exploitation classic that attained near-mythic status on the festival circuit and transformed the Soskas into indie darlings along the way.

Sadly, though you’ve likely read about this flick, you probably haven’t seen it. But, thanks to the beneficence of the folks at IFC Midnight, on January 31, you’ll finally get the opportunity to enjoy the Twisted Twins’ debut feature.

I’m pretty jazzed about this development. I’ve been singing the praises of the Soskas and their warped little film for a while now, so it’s nice to know that the rest of world’s genre fans will, at long last, get the chance to see Dead Hooker in a Trunk.

Besides the film, this new DVD — available for preorder HERE — will contain a host of extras:

When I heard the news, I immediately got in touch with Jen Soska to get her take on this event and maybe, just maybe obtain a scoop on any other twisted projects currently in the works. 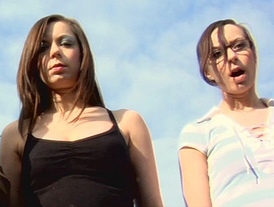 “I can’t believe how much awesome shit we have planned for 2012,” Jen gasped. “We begin cutting American Mary this month, and then we’ll soon be starting our plans for a massive marketing campaign — even bigger and better than what we did for Dead Hooker in a Trunk. It’s insane that after so long the film is finally going to be released worldwide.”

I asked Jen if this DVD differs from the previous UK release, and she said that although “it will be the same version of the film as was released in the UK and Australia, the color correction and sound design have been enhanced. We have also included new photos from our original [film school] trailer of Dead Hooker. It seems so different from the feature, but that’s probably because [Sylvia and I] know both projects so intimately.”

Jen went on to say, “It was important to us and IFC Midnight to not censor Dead Hooker in any way as all the violence, content and language is a vital part of the film and it would take away the heart of the project to change that. IFC has been incredibly supportive about the film.”

With that covered, I had to get some scoop on the ladies’ sophomore effort, American Mary. We know it’s set in the world of underground surgery and promises to be just as bent as Dead Hooker, but what else?

“We aren’t able to go into the details about American Mary just yet, but we can firmly say it is not a sequel to Dead Hooker in any way,” Jen revealed. “You won’t see Badass or Junkie or any of our Dead Hooker characters making a cameo. It’s a different film universe entirely. We read about it being a sequel the other day and wondered where someone got that. It’s our second film; that may be where the confusion lies. Mary is a beast all her own.”

I hadn’t heard the sequel rumor, but it’s an interesting idea. Or, now that they’re “established,” perhaps the Soskas could take a page from the Robert Rodriguez playbook and remake Dead Hooker in a Trunk with a bigger budget. Actually, they’ve already considered that. 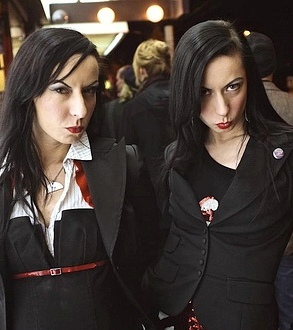 “We’ve talked back and forth about a sequel to Dead Hooker,” she said. “Kind of like the way Robert [Rodriguez] did Desperado after El Mariachi. We’d like to make an even bigger and more insane version of the film. People seem to have an interest in it.”

Always looking forward, the twins don’t want to tread old ground. “It would certainly not be a remake or a typical sequel by any means. It would be a new adventure that would include all the things people loved about the first one. It would just be Dead Hooker on steroids!”

Ooh, now that’s intriguing. But it begs the age-old question: What exactly would a roid-raging Dead Hooker look like?

“You could expect bigger stunts and more of them. We’d throw a few gratuitous explosions in there, the characters would be in-overdrive versions of themselves. Badass would leave one hell of a body count. And we’ve always wanted to make her punch a bear. We had to cut out this scene where Badass chases down a bear and says, ‘Fuck you, bear.’ She then punches it and knocks it out with a single blow. We thought it was hilarious, but we couldn’t find a grizzly we could afford that could do the actions. We will one day,” Jen laughed.

And I bet they will. It’s nice to know legitimatization-by-DVD has done nothing to squelch Jen and Sylvie’s particularly perverse muse. C’mon, Badass punching a bear? I’m so there.