Here’s a Little Taste of ‘The Divide’ 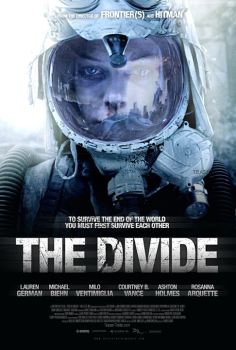 A few months ago, we got a rather intense trailer for The Divide, Xavier Gens’ powerful post-apocalyptic thriller. Now, just in time to prepare us for its January 13 premiere, the clever marketing team at distributor Anchor Bay has revealed the flick’s opening scene. And it’s a doozy.

The story of nine strangers who escape a nuclear attack by hiding out in the bunker-like basement of a New York high-rise, The Divide stars Michael Biehn, Rosanna Arquette, Milo Ventimiglia, Lauren German, Ashton Holmes, Jennifer Blanc-Biehn and Courtney B. Vance. This is a strong ensemble and based on what we’ve seen so far, everyone seems to get their moment in the (nuclear) sun.

Based on the clip embedded below, Gens has done something pretty ballsy — he starts his flick at 11. The opening scene of The Divide is where most filmmakers finish their movies. I mean, where do you go after you’ve blown up the world?

I guess we’ll find out next week. Gens is a decidedly talented director, and he has a great cast and an intriguing concept that he appears to have approached in an interesting manner. The Divide might well be that most elusive of beasts: a post-apocalyptic flick that I actually want to see.