I Want to Live in ‘Corman’s World’ 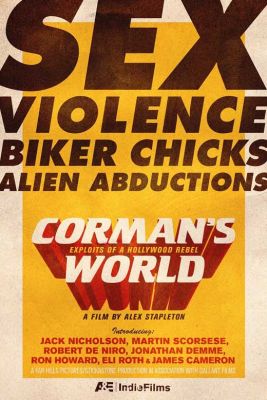 It’s hard to overestimate Roger Corman’s significance. As the director of low-budget fare like It Conquered the World and Creature from the Haunted Sea, Corman is often regarded as a schlockmeister. And though that may be true, Corman is also a groundbreaking filmmaker without whom the landscape of contemporary cinema would look very different.

Thankfully, to remind us of Corman’s immense importance to Hollywood comes Corman’s World: Exploits of a Hollywood Rebel, an in-depth new documentary from Alex Stapleton — and I cannot think of a better Christmas gift.

Corman got his start back in the 1950s, working extensively for American International Pictures, the independent production house responsible for so many of the B-movie drive-in flicks made during the ‘50s, ‘60s and ‘70s. Along the way, he shepherded the careers of budding filmmakers such as Francis Ford Coppola, Ron Howard and Martin Scorsese.

With the mandate “make it fast and make it cheap,” he gave these unknown young directors a chance to make movies when no one else would. That’s right, if it wasn’t for Corman, there’s a good chance we wouldn’t have classics such as The Godfather and Goodfellas…not to mention Rock ‘n’ Roll High School and The Little Shop of Horrors.

Stuffed full of clips and interviews with Corman’s protégés and stars, Stapleton’s documentary promises to be as entertaining as it is informative. With appearances from icons like Robert De Niro, Tom Hanks and Jack Nicholson, Corman’s World is overflowing with star power, yet none of the assembled cinematic legends are more fascinating that Corman himself. It’s hard to reconcile the low-key, unassuming filmmaker onscreen with exploitation classics such as Bloody Mama and Death Race 2000.

Corman’s World was a hot ticket at Sundance this year and opened in theaters in New York and Los Angeles over the weekend. This is rather ironic considering none of Corman’s films would receive the opportunity a film about Corman is receiving. But, hey, it’s better than nothing. Wait, scratch that. It’s better than most everything.