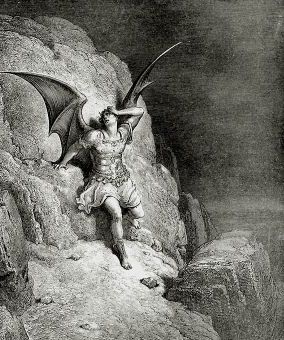 The forthcoming Alex Proyas adaptation of Milton’s Paradise Lost, in which Bradley Cooper is to play — nay, embody — the dark lord Lucifer, has been postponed due to its spiraling budget. I suppose even the infernal powers of Bradley Cooper are not enough to convince producers that an action movie based on a theological treatise illustrating God’s love for mankind is a sure-fire hit, no matter the price.

Deadline is reporting that the cost of Proyas’ film is nearing $150 million, and bill-paying studio Legendary Pictures thinks that Blake’s 17th century poem, with budget-friendly locations such as that famed vacation spot known as the Garden of Eden and a little split-level efficiency called Hell, really ought to cost a little less.

I suppose the money being saved on mid-level supporting players such as Casey Affleck, Camilla Belle, Sam Reid, Dominic Purcell and Benjamin Walker just isn’t enough to cover the catering bill and the “visually audacious” 3D setpieces Proyas has his little heart set on.

This whole mess is similar to the recent Lone Ranger debacle, where Disney decided a cowboy movie starring Johnny Depp as a Native American really shouldn’t cost $250 million, no matter how many special effects were involved. All parties finally agreed to a $215 million budget and fewer digital werewolves.

Compared to that pending disaster, a 3D action flick starring Bradley Cooper as the Devil sounds like an absolute bargain at $150 million. I wonder if it’s too late for Proyas to take a meeting with Disney.