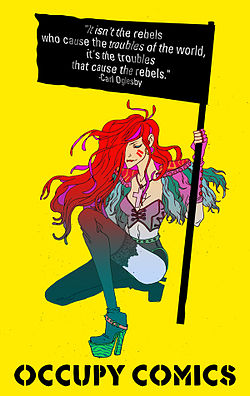 Alan Moore, the legendary comic book malcontent and wizard (really), has teamed with Occupy Comics, a group of comics creators who have joined forces to support the Occupy Wall Street protestors. It’s said the pen is mightier than the sword, but is the wand? Perhaps we’ll now find out.

As a show of support, Occupy Comics is creating a Kickstarter-funded anthology that will be “a time capsule of the passions and emotions driving the movement” and will “tell the stories of the people who are out there putting themselves at risk for an idea.”

Moore is planning to contribute a prose piece that Wired says will “explore the Occupy movement’s principles, corporate control of the comics industry and the superhero paradigm itself.” Magical stuff indeed.

One creator that definitely will not be joining Occupy Comics is that other legendary comic book malcontent and non-wizard, Frank Miller, who took a nasty shot at OWS protestors on his blog last month.

“‘Occupy’ is nothing but a pack of louts, thieves, and rapists, an unruly mob, fed by Woodstock-era nostalgia and putrid false righteousness,” Miller wrote. “These clowns can do nothing but harm America.” Miller went on to say, “This is no popular uprising. This is garbage. And goodness knows they’re spewing their garbage — both politically and physically — every which way they can find.” 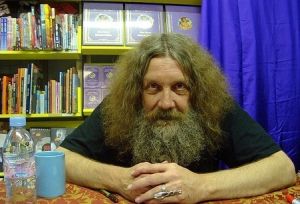 It seems Moore considered Miller’s rant to be fighting words. In an interview with Honest Publishing earlier this week, Moore took a pretty stiff swing at Miller, saying, “Frank Miller is someone whose work I’ve barely looked at for the past twenty years. I thought the Sin City stuff was unreconstructed misogyny, 300 appeared to be wildly ahistoric, homophobic and just completely misguided.

“As far as I can see, the Occupy movement is just ordinary people reclaiming rights which should always have been theirs,” Moore continued. “[The Occupy movement] is a completely justified howl of moral outrage and it seems to be handled in a very intelligent, non-violent way, which is probably another reason why Frank Miller would be less than pleased with it. I’m sure if it had been a bunch of young, sociopathic vigilantes with Batman make-up on their faces, he’d be more in favour of it.”

Hopefully, these two will keep at it long enough for Moore to turn Miller into a snake or a toad. (Insert joke about Miller already being a snake or a toad; how about a warthog?) But until then, the best we can expect is an Occupy Comics series of online comics and limited-edition single-issue comics followed by a hardcover collectable volume.

Check out Occupy Comics’ website as well as their Kickstarter page, where collections will be taken until December 9. If you kick in some cash, aside from an unfamiliar warm feeling in your hard little heart, you’ll receive rewards ranging from a “thank you” to an autographed piece of original art — but no drugs or alcohol, dammit. Oh well, them’s the rules.