Yes, Virginia, There Really Is a Trailer for ‘The Cabin in the Woods’ 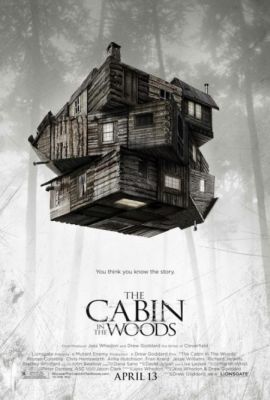 In an effort to further convince us that a movie called The Cabin in the Woods truly exists, Lionsgate has finally premiered a trailer, days after releasing a new poster. Who knows, this flick might actually make it to theaters this time.

Joss Whedon and Drew Goddard’s new film, which Whedon has dubbed “the horror movie to end all horror movies,” promises to make you rethink everything you thought you knew about “cabin in the woods” flicks. But based on what’s in this trailer, there doesn’t seem to be much new ground being broken. In fact, it looks eerily familiar.

I guess the big reveal is that the people hunting these junior pleasure-seekers aren’t your usual psycho killer — there are no masks or machetes to be found here. This dilapidated cabin is actually a high-tech slaughterhouse, complete with two-way mirrors, trap doors and invisible electric fences.

I suppose Goddard and Whedon wanted to bring the old-fashioned horror flick into the modern age. Which is fine. But I think a deserted cabin monitored by a lunatic with a chainsaw is way scarier than one monitored by video surveillance and armed strike teams. After watching Occupy Wall Street news footage, this new take on terror doesn’t feel all that removed from the reality of contemporary society.

Of course, this wasn’t an issue when the flick was shot way back in 2009. So, now The Cabin in the Woods can either be seen as a trenchant comment on present-day issues or it can be seen as a flick whose main conceit lost all its power due to current events.

Did the fact that this flick sat on the shelf for two years help or hurt it? Maybe we should drop the pretense and just look at this movie as a mindless goof with a tired plot. Whatever the case, it feels like The Cabin in the Woods just can’t win.

This article was posted in Updates & Teasers! and tagged Drew Goddard, Joss Whedon, Lionsgate, Occupy Wall Street, Slammed & Damned, The Cabin in the Woods, Theron Neel, Updates & Teasers. Bookmark the permalink. Follow comments with the RSS feed for this post.Trackbacks are closed, but you can Post a Comment.