The Hood Has Eyez 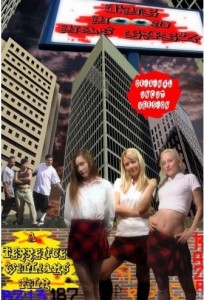 Hell hath no fury like a woman scorned.  And rarely has a woman been more scorned than Kimmy Valencia, the protagonist in Terrence Williams’ new flick, The Hood Has Eyez.  But don’t worry about Kimmy; she can take care of herself.

In the tradition of exploitation classics such as The Last House on the Left and I Spit on Your Grave, The Hood Has Eyez is a twisted tale of rape and revenge.  Kimmy (Cydne Schulte) is a dutiful daughter and A-student who, as usually happens in these films, is led astray and pays an awful price.  Kimmy and her friends, Susan, Rachel and Jerry, decide to skip school one day and go to a party.  On their way there, they literally run into a hysterical woman staggering across the road.  After stopping to help her, things go from bad to worse when the kids are abducted suddenly by Psycho and Joker, a couple of vicious gang bangers.  Before long, another gang member appears.  Her name is Shy Girl (Anne Stinnett) and—surprise—she’s the woman they hit with their car.  After Psycho brutally rapes and sodomizes Kimmy, Jerry and Rachel are murdered.  (Let this be a lesson, kids. Don’t skip class.) Kimmy’s depraved assault transforms her from a nice, gentle girl into a psychotic killer, and she soon exacts revenge that is every bit as horrible as the crimes committed against her.

Watching The Hood Has Eyez is akin to taking a step back into the ‘70s. The flick just feels like an exploitation classic.  Everything from the score to the shot choices and lighting screams grindhouse. Obsessive horror fans will have fun playing “spot the references.”  The film’s title is an allusion to the work of horror director Wes Craven, the filmmaker responsible for The Hills Have Eyes and The Last House on the Left.  In a nod to I Spit on Your Grave (aka Day of the Woman), this film too has a subtitle:  The Hood Has Eyez (aka The Violation of Kimmy Valencia).  And though this movie is similar to others in the rape/revenge genre, it’s not stuck in the past.  The Hood Has Eyez is more extreme in its violence, sexuality and bloody acts of depravity than any of the aforementioned movies. 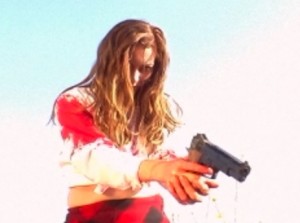 Terrence Williams has taken a huge step forward with The Hood Has Eyez.  His cinematography has really opened up.  The movie looks great—it’s bright and the entire screen is full of detail.  Williams definitely makes the most of his many outdoor locations.  And while he has always worked well with his actors, this time he manages to get excellent performances from his whole cast, most of whom he’s used before.

Antonio Royuela shines as Psycho, the sadistic gang leader, and Anne Stinnett effectively conveys the pain of betrayal that Shy Girl experiences.  As Kimmy’s friends Rachel and Susan, Jamielynn Kane and Jesselyn Desmond are, if nothing else, a lot of fun.  But if this film belongs to any one actor, it’s Cydne Schulte. 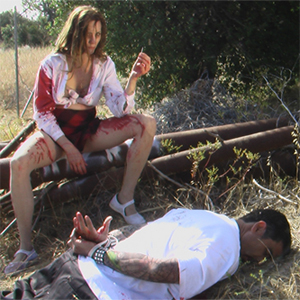 Although all the cast is quite good, most of the players aren’t called upon to give overly expansive performances.  A little humor here, a little anger there, mix in some fear, rinse, repeat.  All are fine, but Cyd Schulte must go from mild-mannered schoolgirl to psycho killer and make it believable—and hold the audience’s sympathy.  It’s quite a task for an actor.  Luckily, she pulls it off easily.  Schulte is quite entertaining as she takes her vengeance on those who wronged her.

As much as I like The Hood Has Eyez, it’s not a flawless movie. There are a couple of minor plot holes, and though the effects are impressive, some are merely adequate. But considering the film’s style and genre, they work well enough.  Also, the running time is somewhat awkward—at 70 minutes, it’s barely feature length.

The Hood Has Eyez is a flick that does what it sets out to do: entertain.  Of course, some people will think it goes too far.  But Terrence Williams didn’t make this movie for those people. Williams has come a long way in his journey through the wilds of Hollywood, and I can’t wait to see where he goes next. Wherever he goes, next time I hope it’s way too far.

This article was posted in Reviews and tagged '70s, Cydne Schulte, exploitation, grindhouse, horror, I Spit on Your Grave, Reviews, Terrence Williams, The Hills Have Eyes, The Hood Has Eyez, The Last House on the Left, Theron Neel, twisted, vengeance, Wes Craven. Bookmark the permalink. Follow comments with the RSS feed for this post.Trackbacks are closed, but you can Post a Comment.