Mirror, Mirror on the Wall; This Is the Worst Snow White of All 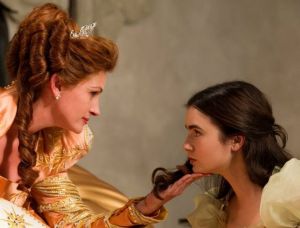 Here we go again. Recently, over at Planet Fury, I wrote about the competing Linda Lovelace projects. Now we’re moving on to competing Snow White projects. O Hollywoodland, you grow ever wearisome.

Just a few days ago, my colleague at Planet Fury, Heidi Honeycutt, wrote rather unenthusiastically about the trailer for Snow White and the Huntsman, the upcoming Snow White flick starring Kristen Stewart and Charlize Theron. I believe Heidi’s exact words were “I can’t wait for the trailer for Mirror, Mirror to come out so I can shred these to pieces side-by-side.” Well, Heidi, sharpen up your talons, my friend, because you got some cutting to do.

I suppose it’s no coincidence that the producers of Mirror, Mirror released their trailer just a few days after the producers of Snow White and the Huntsman released theirs. And, yes, this is where I should make the “they weren’t released; they escaped” joke, but that would just be hacky, right? Sadly, after watching the recently escaped Mirror, Mirror trailer, I’m all hacked out. And, yes, after watching this preview, I had to make that joke. (Truthfully, it’s rare that I’m ever completely hacked out.)

Okay, no more jokes (you’re welcome). Let’s just get to it. The trailer for Mirror, Mirror is so freaking bad that it’s painful to watch. Oh my god. How did this happen? Who allowed this to happen? It seems like, from the very start, every choice made for this movie was wrong. 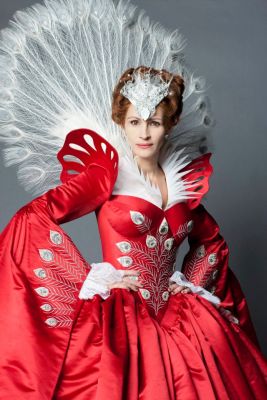 Next, we have Julia Roberts as the evil Queen Clementianna. Yes, the woman who was once America’s Sweetheart might arguably be a charming screen presence, but she sure ain’t a natural comedienne. And for this bush-league burlesque to have any hope of working, the producers don’t need a Star; they need someone that can sell a joke. I mean, if they insist on using this high school script, cast it with actors that can make it work. Nathan Lane, a veteran of this kind of material, has been drafted to keep Roberts from looking too awfully bad, but even he can’t save this tripe. And, bless their second-billed hearts, the rest of the cast just fades into the background. It’s sad when even Snow White can’t hold the screen in her own movie.

Finally, we have the man helming this mess. As a director, Tarsem Singh is a wonderful production designer. And as the director of Immortals and The Cell, he’s sure not the first person you think of for a broad comedy — what, were Rob Reiner and Gary Marshall busy? — because Singh can’t bring a true emotional note to a scene, let alone make a joke sing. But his films always do look marvelous. And if nothing else, Mirror, Mirror appears to be beautiful…but in service of what?

I could go on, but I tire. So I’ll wrap it up. I’m trying to think of a simple way to express my distaste. I’d like to say Mirror, Mirror is all frosting and no cupcake, but that would imply this mirthful misfire tasted good enough to consume. And trust me, it’s going to be hard to swallow what the makers of Mirror, Mirror are cooking up. I recommend a nice sherbet instead. Or maybe pie. Pie’s always good.