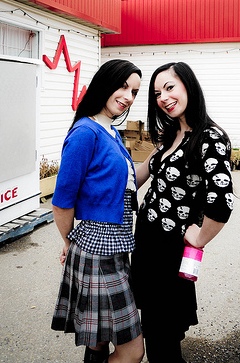 When deciding with whom we should finish our Halloween Memories series, the Planet Fury editorial staff unanimously agreed there could be no better closers than those groovy grindhouse gals from the Great White North, Jen and Sylvia Soska.

With their mondo-cool debut, Dead Hooker in a Trunk, the Soskas proved they are two of the most exciting filmmaking talents in the world of genre cinema, so obviously the Twisted Twins would be the perfect choice to close our Halloween spectacular.

But given that they’re currently in production on their sophomore feature, American Mary, could we even wrangle an interview with these crazy-busy Canadians? You bet we could!

Thanks so much for carving out some time to talk with us, ladies — especially since you’re not doing any press right now. But I’m sure the topic had something to do with it. We’ve discussed your undying love of Halloween before.

Sylvia: We would look forward to it all year long. My parents thought it was funny because we would muchly prefer Halloween to Christmas, birthdays, anything else. There have been lots of folks that used to come over to me and say, “It’s not Halloween” because of my attire. Now, every day kind of is.

Jen: We’re very lucky to be able to have Halloween every day, but there is something undeniably special about Halloween. We’ve almost religiously dressed up every year. It makes me sad to hear “grownups” say that they don’t like Halloween and haven’t dressed up since they were kids. Where is it written or said that once you reach a certain age you have to stop having fun? And that’s really what Halloween is — a whole lot of demented fun.

You’re never too old to act like a kid. Speaking of which — what special memories do you have of Halloweens past? You know, when you actually were kids?

Sylvia: I remember the first time that I went trick of treating with boys alone.

Sylvia: Most of my friends growing up were boys, so it wasn’t that weird to me. There was this huge cloaked grim reaper that I kept seeing, following us. At one point, he walked right over and gave me a nod. I instantly recognized it was my dad. Sweet that he homicidally kept an eye out for us.

Jen: I remember the year that Sylvie had a Batman Returns-style Catwoman suit custom made for me. It was the first year we had jobs, and she saved up for it because she knew how much it meant to me. I felt so fucking cool in it. I still have it. It’s a bitch to get in and out of, but once it’s on? Totally worth the trouble. 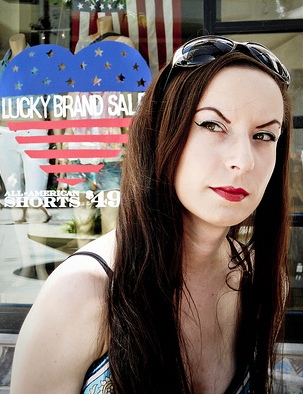 Those are surprisingly sweet memories for the self-proclaimed Twisted Twins. What other costumes stand out?

Jen: I loved being Catwoman! I was a variation of her every year for a period when I was little. I love being iconic film characters when they have a film out that summer. Anything Tarantino, because he’s the fucking man. I loved being Gogo [Yubari, from Kill Bill]. I even had an authentic spiked ball and chain shipped in from the UK for it and to add to my ever-growing weapons collection.

Jen: I think I’ll be Black Widow next year to both celebrate Joss Whedon’s The Avengers release and to hunt down a Tony Stark for my own.

Maybe you can convert the Catwoman suit for the Black Widow costume.

Sylvia: We used to sew all our costumes and that made it an effort of pride. Being huge nerds, we went as Kitana and Mileena, Xena, Dollface, Beatrix Kiddo, Elle Driver, Nancy from Sin City, Catwoman, Sindel — fuck, I wish I had time to sew one this year too.

Yeah, you guys are hella-busy these days. I know you are being frustratingly tight-lipped about American Mary — but as a special Halloween treat, can you give us just a wisp of a clue of a hint about what you have planned?

Sylvia: Mary is like nothing I’ve ever experienced before. When I had my characters come in for the auditions, it was like some weird dream. I got to stand in while one of the characters came up to hurt me. My direction: “Scare the shit out of me. Do anything but punch me.” I had to fight the grin that wanted to overtake my lips.

Any plot points you want to spill, feel free.

Sylvia: Oooh, I don’t want to give away anything. I want to tell you everything because I’ve been seriously possessed by this project, but it must be handled a certain way to give the appropriate introduction. Twisted Twins Productions’ anniversary is on December 11 and we always have something fun. Stay tuned for a big American Mary reveal that day.

Jen: You know, I can’t wait to be able to fully talk about the film.

Jen: I think American Mary is a real game changer. It’s like having all these amazingly perfect Christmas presents all picked out and gift-wrapped for your friends and family and having to keep it all hush-hush until Christmas morning!

I can say that the film is a redefinition of horror. I love horror movies. I feel there is a specific storytelling element that has been missing. Sure, that may come as a laugh coming from the creators of Dead Hooker in a Trunk, but the two projects are polar opposites in almost every way. Our style remains, our strange and beautiful characters, our humor and our banter. We have an absolutely incredible team behind us. It’s an honor to be working with Todd Masters and his outstanding team at MastersFX. 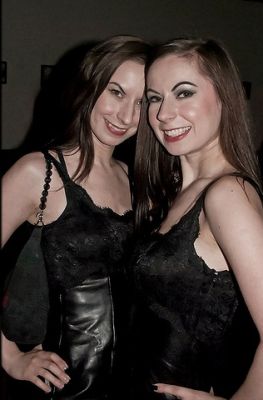 Awesome! I really, really cannot wait — really! Okay, I know y’all need to get back, so let’s wrap this up. Can each of you tell us your three favorite horror flicks and what it is about them that does it for you? You first, Sylvie.

Sylvia: American Psycho. I love the film and the book. The satire and the graphic nature really got me. Mary Harron’s efforts in defending the artistic merit of the film to the misinformed when they were trying to ban filming in Toronto changed how I look at directors and their work.

Antichrist is one of the most powerful and effective films that I have ever seen. I will never forget gasping like a prude in the theater during the penetration shot. Just masterful filmmaking — the entire cast, the direction. I want to be as brave as the artists involved in that project. I would rape, kill and maim to work with Lars.

Sylvia: Suicide Club. I wish I made this film. It’s a beautiful reflection of humanity and the value we put on life. It reminds me of Sylvia Plath’s view on suicide. It’s awful, but the way she describes it, it almost seems inviting. Very weird little flick.

That’s a nice left-of-center assortment. Actually, Suicide Club has come up a lot in the conversations I’ve had over the past weeks. Okay, Jen. Your turn.

Jen: Usually they’re very similar to Sylv’s, but for shits and giggles, I’ll give my must-watch Halloween list.

Perfect! Go for it.

Jen: The Exorcist, because Dick Smith is a god. I love prosthetics and their creators. I’m an ‘80s brat and I was spoiled on films like Jacob’s Ladder and The Thing. The Exorcist scared the shit out of me when I first saw it — being a Roman Catholic that used to altar-serve with an incredible priest who performed exorcisms didn’t help with my undeniable curiosity — and it still scares me shitless to this day. I always turn off all the lights and, after the film’s done, run to turn them on again [laughs]. I highly recommend it. 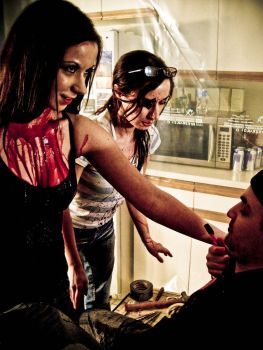 I’m a Dick Smith geek too! It’s still my favorite horror flick. Next?

Jen: The Shining. Yeah, it’s a twin thing. “Come play with us, Danny.” We love Stephen King. His novels sculpted our dark and devious senses of humor. As a result, I like my horror with moments of levity. There’s nothing like getting that beautiful “oh shit, I shouldn’t be laughing” laughter out of an audience.

As you did often with Dead Hooker.

Jen: My favorite horror films are ones where I get a bit of a laugh. However, with a sense of humor like mine, I find a lot of laughs where others might not. The Shining is a masterpiece.

Jen: The Rocky Horror Picture Show. It’s the film to watch on Halloween. Scary? Meh. Radcore? Very. Watching the film reminds me of dressing up all fabulous and hitting a live performance of the show. It’s the perfect film for Halloween, and it captures that joyous feeling of the holiday.

As you said, “a whole lot of demented fun.” Kind of like Dead Hooker in a Trunk but, you know, with cross-dressing…