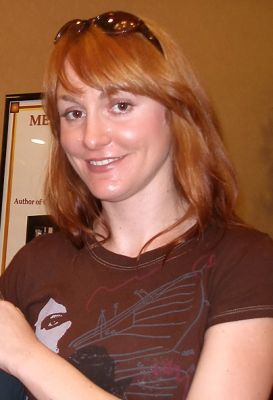 Planet Fury’s Halloween Memories series has focused on our favorite women currently working in the horror and genre arena. So, of course, we couldn’t end without talking to the woman dearest to Planet Fury’s bloody heart: our very own editor-in-chief, Heidi Honeycutt.

Though she works mainly as a journalist these days, Heidi has been kicking around the entertainment industry for years now, doing a little bit of everything. She’s acted in horror flicks; she’s written, directed and produced films; she’s designed websites; she’s hosted radio shows; she’s babysat certain insufferable celebrity children. And of course, there’s the whole “created Pretty/Scary and FanGirlTastic and Planet Fury” deal. She’s a busy, busy lady.

So, when I contacted Heidi to see if she’d be interested in reminiscing about Halloween, she agreed immediately and promised to follow up soon. Then, I waited. And waited. Finally, Heidi got back to me and answered my questions in her own inimitable way: bitterly and cynically honestly and totally unfiltered.

Hey, boss! So far, everyone I’ve talked to are Halloween people. Are you going to break my streak? Are you a Halloween person?

I am a Halloween person, but I am also very lazy.

Yeah, I’ve heard that about you.

I love Halloween decorations and Halloween costumes and horror films set on Halloween night. But on Halloween, it seems that kids never seem to come by often enough, parties are always 30 miles away, and I can’t drink because I need to drive home because I live in a city with no public transportation — Halloween in Los Angeles is overrated.

Now that, I haven’t heard.

I need to live in a small town in the middle of the USA, but one that isn’t poor and that has a nice Main Street with a huge Halloween Town party and all the kids can walk around without the parents and won’t get molested — like in Trick ‘r Treat — because, otherwise, I’m staying home and watching movies on Halloween. Halloween = Lots of work, very little payoff.

I have to admit, I feel more and more that way every year myself. 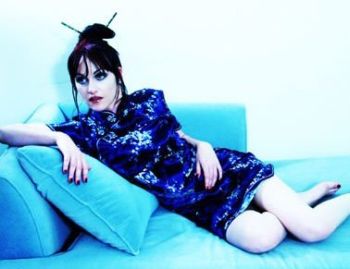 Preaching to the choir, sister! Speaking of the good ol’ days, do you have any cherished memories you’d like to share? Since, you know, this is the Halloween memories series and all.

[Laughs] Absolutely! I’d be disappointed if you didn’t

Now that I think about it, Halloween sucked when I was a kid too.

When I was 10, I was friends with these little bitches on my street that used to make fun of me behind my back and decided I wasn’t cool enough to hang out with them. One’s name was Sarah, but I can’t remember the other’s name. Anyway, they invited a bunch of girls over to go trick or treating but did not invite me because I was a nerd.

Back in the days before nerd girls were cool, obviously.

I had to beg them to let me trick or treat with them, but I wasn’t allowed to spend the night for the slumber party with all the other girls because they decided I was lame — because, you know at 10, they were the epitome of awesome. It also rained that Halloween. That experience scarred me for life.

That’s brutal! Childhood is not for kids.

I’ve never gotten over how much those girls sucked and how shitty they made my tenth Halloween. I want to find these girls and punch them in their ugly little faces now that they’re old and aren’t expecting it. Fuck you, bitches! I was a gypsy that year.

Umm, okay. That costume info was a little random. But since you mentioned it, what was your favorite childhood costume?

My favorite Halloween costume was a fairy princess. I wore that costume five years in a row, sometimes adding a crown that I bedazzled myself with rhinestones, sometimes a tiara out of gold construction paper.

I also wore pink tights, a pink tutu and leotard, and had a fake pair of wings.

As opposed to a real pair?

God, I loved that costume. I wore it until I was way too big for it and I think it just ripped one day. I think there’s no better costume than a fairy princess, ever, for any reason, for any occasion.

Yeah, tutus and wings never go out of style! Something else that never goes out of style, especially around Planet Fury, is horror flicks. You, my friend and employer, are a noted horror journalist. So your opinion carries some weight in this regard. Inquiring minds want to know, Heidi, what are your three favorite horror movies?

My top three horror flicks— now, there are some really good horror movies out there that are better than these. Psycho, The Haunting, The Shining — those are good films that probably deserve the critical acclaim they got. I just can’t fucking sit through them again, ever. Once you watch The Shining 100 times— I get so bored of the intense and gorgeous cinematography and artistic vision and I just want shit to jump out at me and to not feel eternally depressed and anxious by what I see onscreen.

My number one is Dead Alive — a.k.a. Braindead — by Peter Jackson. This is simply one of the best zombie films ever made. Perfect mix of low budget and “enough budget” to make a great gore-soaked, comedic flick.

Yeah, I wish he’d go back to those kinds of movies again, just once. You know, like Raimi did with Drag Me to Hell.

I don’t really like any other movies. Okay, kind of kidding. Next, Halloween  — the original, by John Carpenter.

Carpenter has made about four or five actual good films out of the probably 40 he’s directed, and 1978’s Halloween is probably his best. I have never been so goddamned scared in my life in a horror film, especially as a child. I think I had nightmares of Michael Meyers’ face peering in through my window from some bushes in my backyard — and some daydreams too — that actually caused me to suffer real anxiety attacks that probably should have been looked into by my parents.

These nightmarish visions were even more terrifying than the ones I had about Joe Dante’s The Howling, in which a giant werewolf would come crashing through my bedroom window, bubbling in mid-werewolf-change, to rip me to pieces.

Suspiria. Okay, yes, it’s full of boring and intense cinematography and artistic vision, but it is amazing. The colors Argento used in Suspiria taught me to love orange next to blue and to appreciate the way lighting is used to create mood in horror movies. Everything from the soundtrack to the semi-bad acting to the seriously beautiful sets and art direction make this more than just another shitty Italian horror movie; it’s a dark fairy tale and a beautiful experiment in art and color.

Much like that costume you loved with the wings and the tutu. I’m sensing a pattern here.