When I contacted Tiffany Shepis for Planet Fury’s Halloween Memories series, she lit up. “I love Halloween! I love the decorations, the dressing up, the haunted houses, the way the weather is — everything.”

Dropping her voice slightly, she confessed, “I am, however, also a giant Halloweeny. I’m the girl attached to my husband’s, daughter’s, friends’ backs while walking through a haunted maze. I get totally freaked out in the strobe light rooms, and I’m fucking terrified to walk through a room filled with hanging body bags.”

“I know damn well that they’re actors and that somebody is going to pop out,” Tiffany explained, “but I just can’t help but think, ‘Man, if I were a serial killer, this would be the best place to hide out and slaughter somebody.’”

Coming from one of the most badass scream queens working today, this might seem like a surprising revelation. But after talking to several horror actresses and filmmakers over the past week, I’ve learned that even the people who deal in scares on a daily basis are still affected by horror’s primal power — maybe moreso than civilians.

Tiffany snuck into the movie biz when she was a teenager, lying about her age to snag a role in a Troma’s 1996 flick, Tromeo and Juliet. But, in truth, her film debut came a little earlier than that and, of course, Halloween was involved.

“Some friends and I made a horror film on Halloween when we were about 8 or 9,” she said. “I remember jumping off of my garage roof screaming, with ketchup all over me, and then pretending to stab one of my friends.” 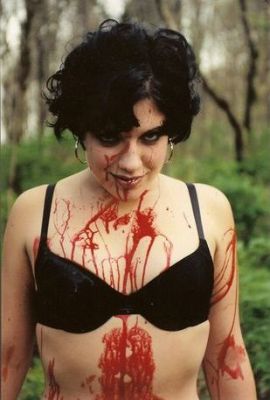 Tiffany continued, smiling at the memory. “We buried the giant VHS tape — yes, this was a loooooong time ago — in a friend’s backyard and said we would return when we were 20 and dig it up. We never did. So somebody in New Rochelle, New York, will one day discover this awesome gem…and probably get it appraised at the Antiques Roadshow.”

Following this recollection of movie mischief and treasure lost, the conversation turned naturally to favorite horror flicks. And perhaps it’s no surprise that Tiff’s top three scary movies all hail from her childhood.

“Mountaintop Motel Massacre, ‘cause my brother and I would watch it every Halloween and make fun of my mom for looking like the crazy lady,” she recalled. “Fun, stupid, fantastic movie that brings back great childhood memories of terrorizing my mother.”

Next up? “A Nightmare on Elm Street, ‘cause it’s back when Johnny Depp was normal and hot, and it scared the hell out of me. I remember anytime I was at a friend’s house that had steps with carpet, I had to run up them really, really fast before they would turn in to a quicksand-like substance.”

Tiffany’s final choice is Brian Yuzna’s underrated zombie flick, Return of the Living Dead 3, released on October 31, 1993. “Mindy Clarke was the hottest, most badass undead bitch of all time,” she asserted. “It so made me want to be a monster in movies, and still does. Come on remake!”

And there it is: A direct line from Tiffany Shepis’ childhood hopes to her current dreams. Because it directly inspired the career of one of contemporary horror’s most prolific and beloved performers, Return of the Living Dead 3 could be considered one of the more important modern horror flicks. But don’t mention that to Tiffany; she’d just laugh.

This article was posted in Interviews and tagged A Nightmare in Elm Street, Brian Yuzna, Halloween, Interviews, Melinda Clarke, Mountaintop Motel Massacre, Planet Fury, Return of the Living Dead 3, Slammed & Damned, Theron Neel, Tiffany Shepis, Troma, Tromeo and Juliet. Bookmark the permalink. Follow comments with the RSS feed for this post.Trackbacks are closed, but you can Post a Comment.