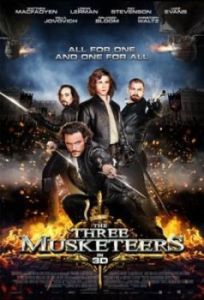 Hollywood has been repeatedly retelling the same classic tales almost since the beginning of filmmaking, and Paul W. S. Anderson’s new remake of The Three Musketeers illustrates why: No matter how hard a particular director might try, it’s hard to screw up a really good story.

Alexander Dumas’ 1844 novel has been put to film dozens of times, and each movie has tweaked the story to some degree. But Anderson’s version is the first one to be shot in 3D and the first one to feature giant airships mounted with flame-throwing cannons. This begs the question, did we really need a Three Musketeers with flame-throwing 3D cannons? Of course we didn’t. But since we now have one, we might as well talk about it.

You probably are familiar with the story of The Three Musketeers, though if you are you’re probably not the intended audience for this version, which was made for 20-year-olds who haven’t, and will never, read the book and haven’t seen one of the previous films. Or, if they have seen one of the previous films, it was probably the agreeable 1993 Disney version. Now, they have a wicked cool new Three Musketeers they can claim as their own, yet one that evokes a strange new experience — hey, kid, that weird warm sensation you’re feeling? That’s called nostalgia. Get used to it.

Our tale begins at the dawn of the 17th century, and the young Frenchman d’Artagnan (Logan Lerman) has left his family farm for Paris, where he hopes to follow in his father’s footsteps by joining the musketeers and serving the foppish young King Louis XIII (Freddie Fox). When he arrives, d’Artagnan befriends the titular three musketeers, Athos (Matthew Macfayden), Porthos (Ray Stevenson) and Aramis (Luke Evans), who inform him that the musketeers have been disbanded.

Before long, our heroes have run afoul of the nefarious Cardinal Richelieu (Christoph Waltz), who has designs on the throne and has hatched a plot to start a war with England. He is aided by the duplicitous Milady de Winter (Milla Jovovich), who earlier betrayed the three musketeers by plotting with the weasely Lord Buckingham (Orlando Bloom), breaking the heart of her lover, Athos, in the process. There follows many more plots, plans, schemes, crosses, double-crosses, sword fights, musket blasts and, yes, battling giant airships mounted with flame-throwing cannons.

Although he displays flashes of taste, Anderson’s directorial aesthetic can be summed up in one word: More. The flick begins nicely with a clever expository conceit that employs military miniatures to set the scene. But as The Three Musketeers progresses, he continues to pile on the spectacle until the film feels it might bust its seams. He’s taken a classic adventure tale and morphed it into a contemporary caper flick filled with gimmicky editing, bombastic setpieces, explosions, state-of the-art visual effects and steampunk accoutrements. But I have to admit, it’s a gorgeous-looking movie, full of breathtaking sets and stunning visuals. Every bit of the reported $80 million budget is up there on the screen to behold.

While they retain large portions of the standard plot, Anderson and his screenwriters conceive other sections out of whole cloth — such as those giant airships (because, hey, pirates are in). But filmmakers have been tinkering with The Three Musketeers since 1903; it’s been spun in every conceivable direction, and still it survives. So it’s probably no surprise that while Anderson’s movie doesn’t always work, it works best when it sticks to the simplicity of the original storyline.

As much as I expected to dislike this new take on an old favorite, I can’t dismiss it out of hand. It’s not bad, just extraneous. Try as he might (and he does try), Anderson just can’t kill this classic tale. At its heart, The Three Musketeers is bulletproof.