The Gangsters Meet the Fangster — Bonnie & Clyde vs. Dracula 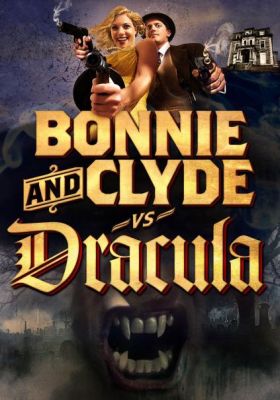 The annals of horror cinema are littered with numerous unlikely encounters. Over the years, Billy the Kid has met Dracula, Jesse James has met Frankenstein’s daughter, and Abbott & Costello have met, well, pretty much everyone.

Bonnie & Clyde vs. Dracula is the latest in this continuing series of improbable historic meetings and comes to us courtesy of writer/director Timothy Friend. Sadly, it’s as disappointing as it is far-fetched.

Not that there’s anything wrong with far-fetched, mind you. This is B-movie horror — the more far-fetched, the better. A flick like this doesn’t have to be believable; it just has to deliver on its super-sensational title in an engaging way. And Bonnie & Clyde vs. Dracula doesn’t do that.

Friend has conceived a film with two concurrent storylines, neither of which ever really takes off. Bonnie (Tiffany Shepis) and Clyde (Trent Haaga) are roaming the countryside, looking for their next big score. But Bonnie is getting restless; the gangster lifestyle is not getting her where she wants to go. Clyde loves her and wants her to be happy, but times are hard in rural 1930s America.

Meanwhile, in that spooky old house on the hill, the horribly disfigured and infirm evil Dr. Loveless (Allen Lowman) has trapped a blood-starved Count Dracula (Russell Friend) in a dungeon. Aided by his childlike sister Annabel (Jennifer Friend), Dr. Loveless plans to restore Dracula to his former greatness by providing him with all the blood he needs, in the hope that the Count will assist him in recovering his good health.

As the movie moves along, Bonnie and Clyde continue to plot and Dr. Loveless continues to scheme. And both stories continue to lurch forward fairly uneventfully. But because the title Bonnie & Clyde vs. Dracula conjures up all kinds of exciting and outrageous images, we know that eventually Bonnie and Clyde will cross paths with Dracula in an exciting and outrageous manner. Right? Wrong. 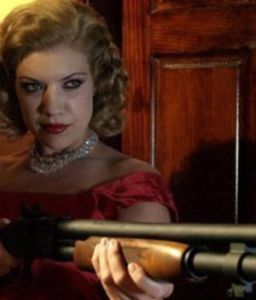 Well, they do cross paths eventually…very eventually. It takes more than an hour for the notorious outlaws to stumble upon the infamous vampire. And, let’s face it, in a movie like this, that’s way too long. And even when they do meet, it’s not very exciting or outrageous. What Friend has given us is, essentially, a deliberately paced period drama that morphs into an exploitation flick in the last 15 minutes. But that’s not to say Bonnie & Clyde vs. Dracula — which, though shot in 2008, is just now making its way to DVD — doesn’t have a few things going for.

Friend has delivered a film that looks fantastic. The frames are always well composed and he effectively evokes the early ‘30s through costumes, props and score. All his actors are first-rate, ensuring Friend’s smart dialogue is well-delivered. As usual, Tiffany Shepis is the standout. Her Bonnie is both a sexy, smart sociopath and a woman yearning for something more. Trent Haaga plays Clyde a bit more lightly, which makes for a fun performance, but at times it feels like he and Shepis are in different movies.

Speaking of different movies, whenever the flick shifts to Dr. Loveless’ mansion, the film’s whole tone shifts as well. Allen Lowman’s Dr. Loveless is a melodramatic, foppish Brit clad in a smoking jacket and sporting a gunny sack on his head. Perhaps Lowman felt the need to ham it up because the audience never sees his face, but it’s a misfire. And Russell Friend’s Goth-y Count Dracula is pretty much a nonentity. He gets almost no screen time, and when he does appear, he makes practically no impression.

But this portion of the film isn’t a total bust, due to Jennifer Friend’s Annabel, who lights up the screen whenever she appears. Though held captive by her brother, the naïve Annabel lives in a world of her own design, one constructed from pulp tales, radio serials and Indian chiefs. With Annabel, Jennifer Friend has built a character who manages the task of being both delightfully funny and unexpectedly affecting.

After about 80 tonally confused minutes, Friend allows his flick to finally become the movie it needs to be, but just barely. And that’s too bad, because perhaps the worst thing that can be said about a movie titled Bonnie & Clyde vs. Dracula is “too little, too late.”

This article was posted in Reviews and tagged Allen Lowman, B movie, Bonnie & Clyde vs. Dracula, exploitation, horror, Jennifer Friend, Reviews, Russell Friend, Slammed & Damned, Theron Neel, Tiffany Shepis, Timothy Friend, Trent Haaga. Bookmark the permalink. Follow comments with the RSS feed for this post.Trackbacks are closed, but you can Post a Comment.